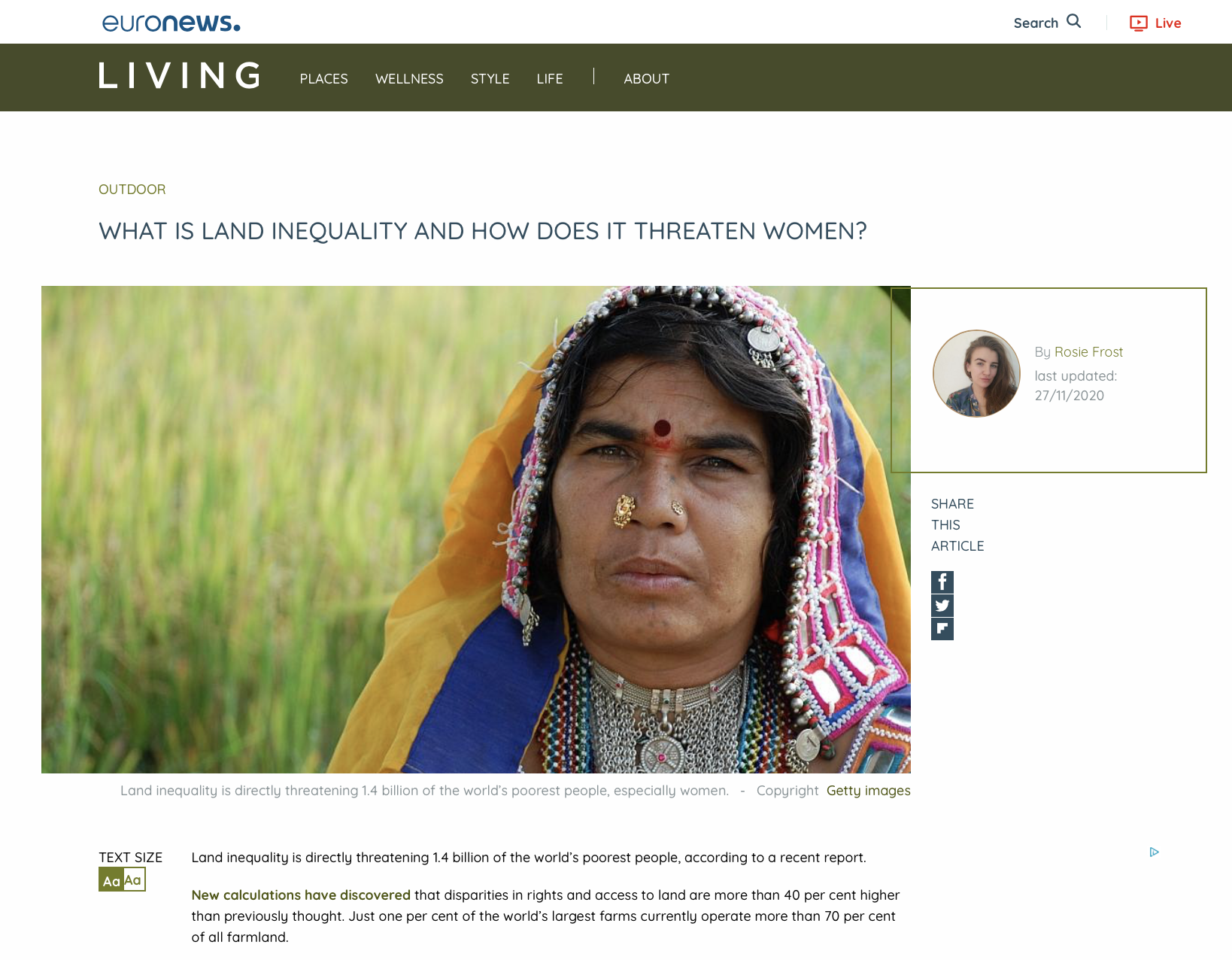 Land inequality is directly threatening 1.4 billion of the world’s poorest people, according to a recent report.

New calculations have discovered that disparities in rights and access to land are more than 40 percent higher than previously thought. Just one percent of the world’s largest farms currently operate more than 70 percent of all farmland.

A lack of access and ownership is pushing rural and Indigenous communities off of the land. It is also putting the livelihoods of an estimated 2.5 billion people at risk, the International Land Coalition (ILC) & Oxfam report found.

“In rural Guatemala, extreme land inequality undermines the rights and livelihoods of indigenous and small-farmer communities and exacerbates the climate crisis.

Turns out its flatulence, but sophisticated flatulence, used by herring for communication. This ability, as it should be called, has been long understood:

Quoted from: Rigby’s Encyclopaedia of the Herring

Herrings can make a noise when they are lifted from the sea. This has been known for hundreds of years. In De Harengo (1643) Paul Neucrantz devotes a whole chapter to the subject, Concerning the squeaking of herrings whilst they do not breathe, arguing:

All fish have this so-called voice, coming either from their gills, which contain little bristles, or from the innards gathered around their stomachs – because air is held in these places and, when the fish are rubbed or shaken, sounds are squeezed out.

In The Herring; Its Effect on the History of Britain (1919), AM Samuel writes:

There is a belief among fishermen that a herring when caught articulates a sound similar to the word “cheese.” This sound is caused by an escape of air from the air bladder, or a movement of the gills. Fishermen, indeed, frequently state that the herrings “sneeze,” just as Aristotle says that gurnards “grunt.”

In 2003 the sneeze was confirmed as a high-pitched fart from the herring’s swim bladder, via its anus. It was suggested that the purpose of this little raspberry was likely to be rooted in nighttime communication within the shoal. 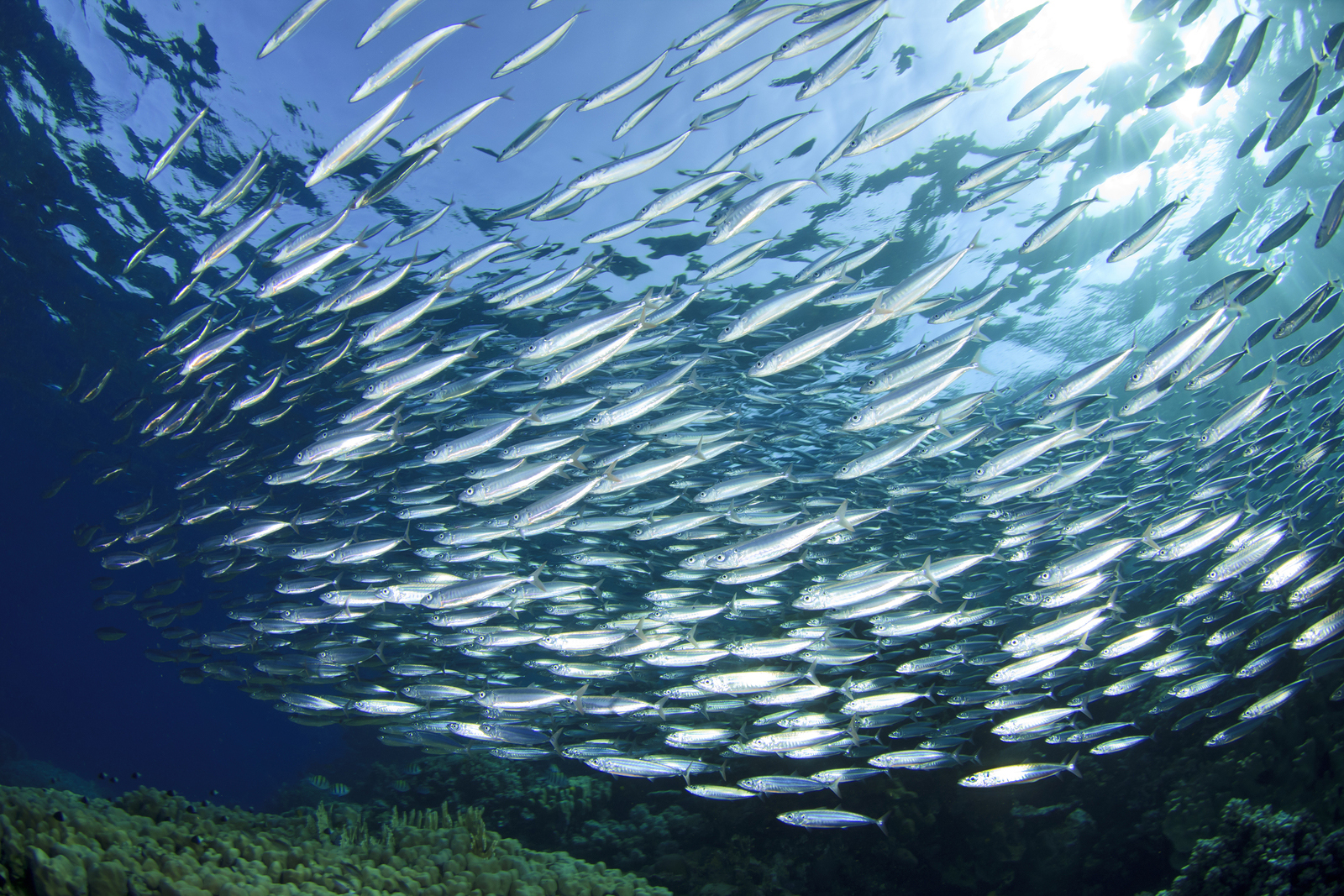 But on to the geopolitics (source)

In 1981, a Soviet submarine ran aground on the south coast of Sweden, just 10 kilometers (6.2 miles) from a Swedish naval base. The Soviets claimed that they were forced into Swedish territory by severe distress, and later navigation errors, while Sweden saw it as proof that the then Soviet Union was infiltrating Swedish waters.

The submarine was returned to international waters, but the Swedish government remained alert, convinced that Russian subs could still be operating near their territory. Which is when they started to pick up elusive underwater signals and sounds. In 1982, several of Sweden’s subs, boats, and helicopters pursued one of these unidentified sources for a whole month, only to come up empty-handed.

This continued for over a decade. Every time they picked up an acoustic signal they would search and find nothing but for a few bubbles on the sea’s surface. Sweden was, of course, worried about the intrusions, and couldn’t think why, with the Cold War now over, Russia would continue to provoke them in this manner.

And these bubbles, so to speak, were not Soviets, but herring farts.

Moral of the story: we need to know more about the gaseous emissions of all lifeforms. 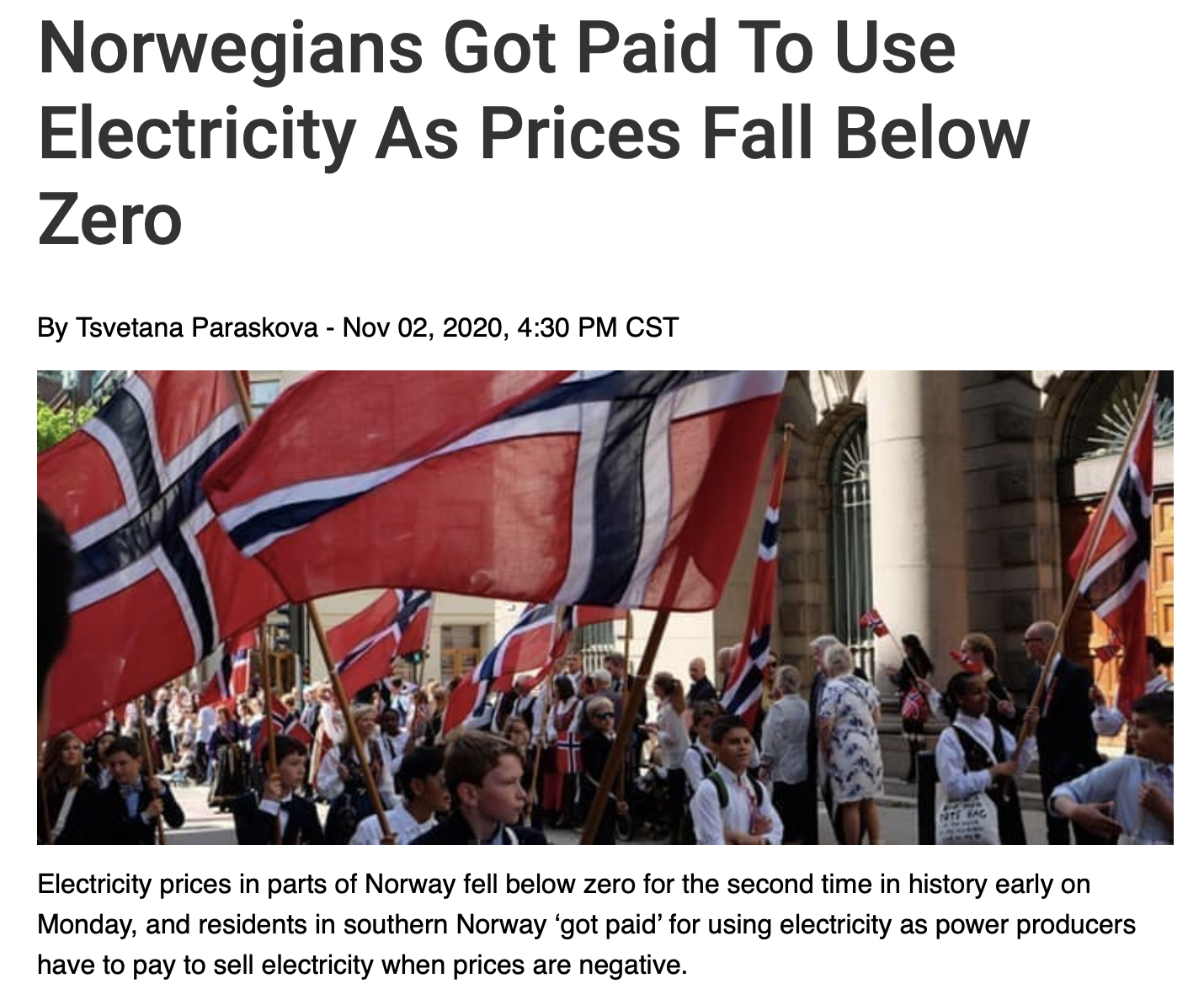 Electricity prices in parts of Norway fell below zero for the second time in history early on Monday, and residents in southern Norway ‘got paid’ for using electricity as power producers have to pay to sell electricity when prices are negative.

The latest negative electricity price from Monday was the result of heavy rainfall and wind in recent weeks as well as higher imports of nuclear power from Sweden, analysts told E24. Higher than normal seasonal temperatures also contributed to low power demand in southern Norway.

Electricity prices are expected to rise with the coming of the winter in the Nordic country, experts said.

Norway, Western Europe’s biggest oil and gas producer, generates most of its electricity from hydropower. According to Norwegian company Statkraft, hydropower accounts for 99 percent of all power generation in Norway. Globally, hydropower represents around one-sixth of the total generated electricity supply, Statkraft says. 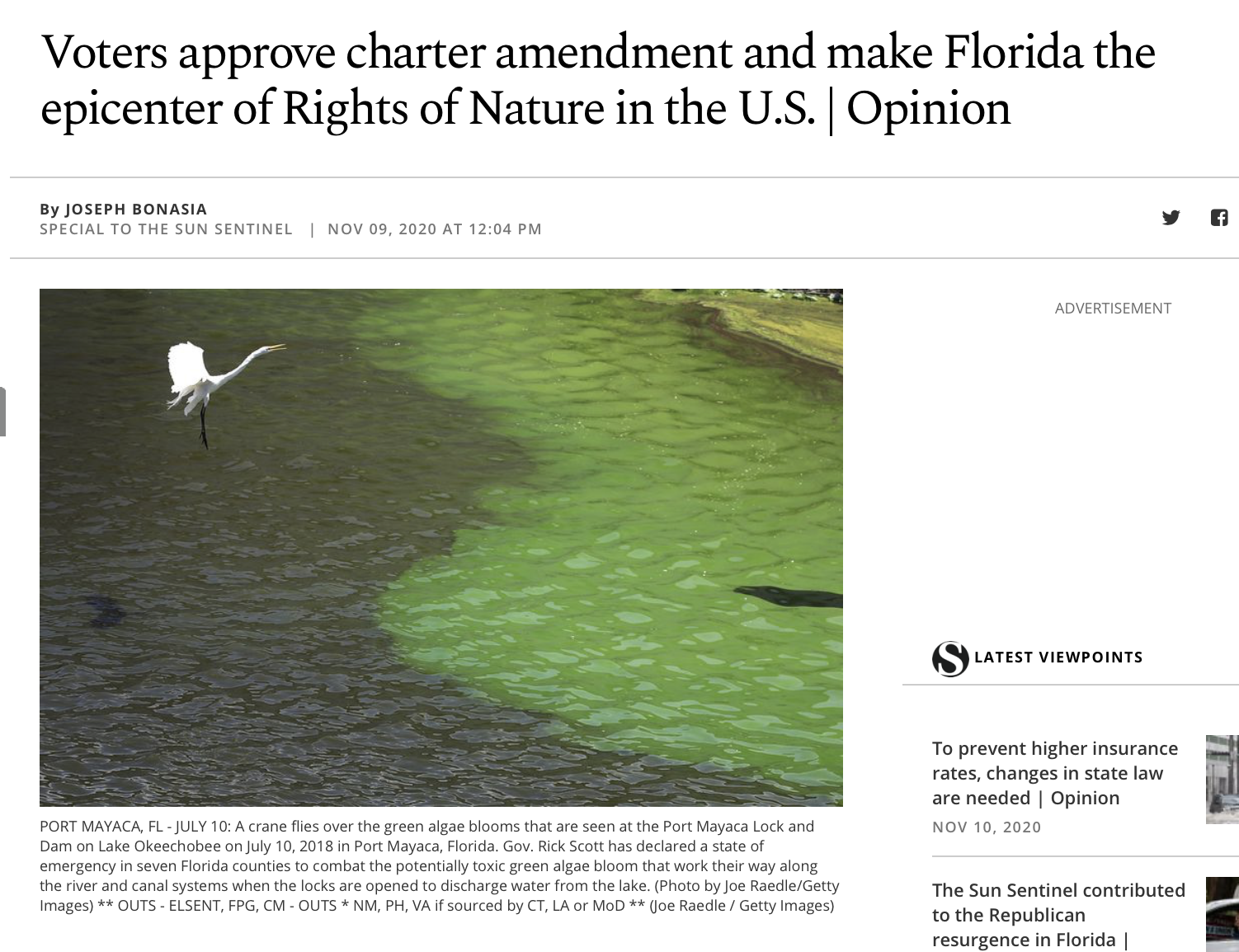 On Election Day, a breathtaking 89% of Orange County voters approved the Right to Clean Water Charter Amendment. Orange County is now the largest jurisdiction in the nation to pass this kind of legislation.

Historic in its scope and meaning, this vote ushers in the systemic change Florida needs, and it makes Florida the epicenter of the Rights of Nature movement in the United States.

This is an indisputable, bipartisan mandate from the citizens of Orange County. Approval of the amendment — also known as the Wekiva River and Econlockhatchee River Bill of Rights — shows that the rights to clean water and healthy ecosystems are not to be subordinated to the interests of polluters. The amendment gives citizens the right to sue corporate polluters in court, without having to show they have been personally harmed, as state law requires. 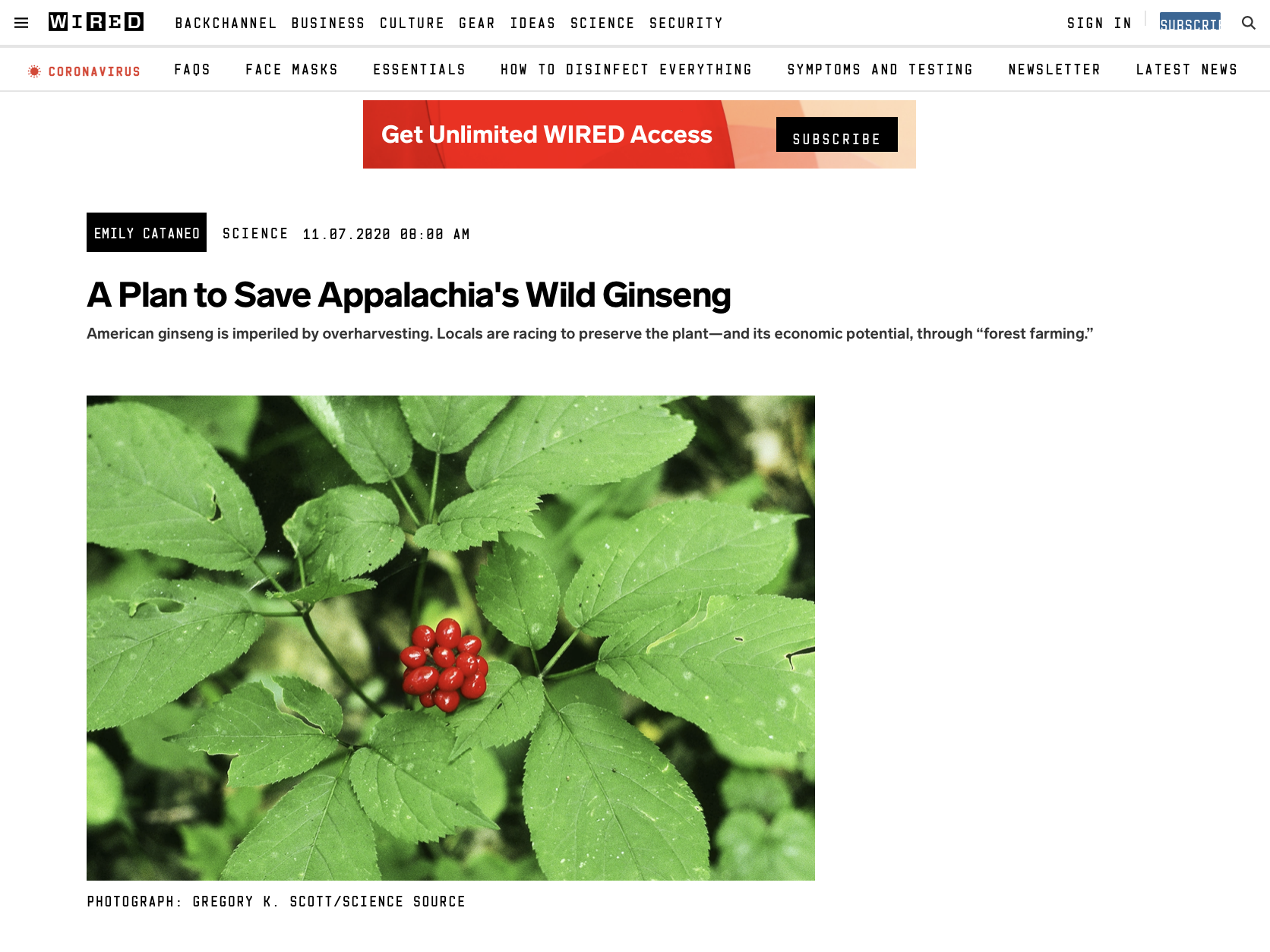 For centuries, diggers have tromped into the woods in this part of the country to pull up ginseng roots and sell them for $500 to $1,000 per pound to middleman buyers, who in turn sell them to China, where ginseng is prized as a curative.

But both this storied plant and this practice are imperiled by overharvesting, an issue that could worsen this year thanks to Covid-19. Ginseng has long been prized in folk medicine for its purported health benefits, which have been borne out by scientific studies on the plant’s antiviral and antibacterial properties, and some researchers are worried that the pandemic could heighten Chinese demand for this plant. But even before this potentially tumultuous year, stakeholders in Appalachia, like Gao, have been racing to preserve ginseng and its economic potential.

A key component of their strategy is forest farming—intentionally planting seeds in forestland and harvesting them responsibly, instead of either growing them in cultivated plots that may require pesticides and fertilizers or randomly yanking them from the woods. There are plenty of landowners in Appalachia with forested properties, and scientists believe that encouraging those landowners to plant ginseng could create economic opportunity while reducing pressure on the overharvested wild stock. 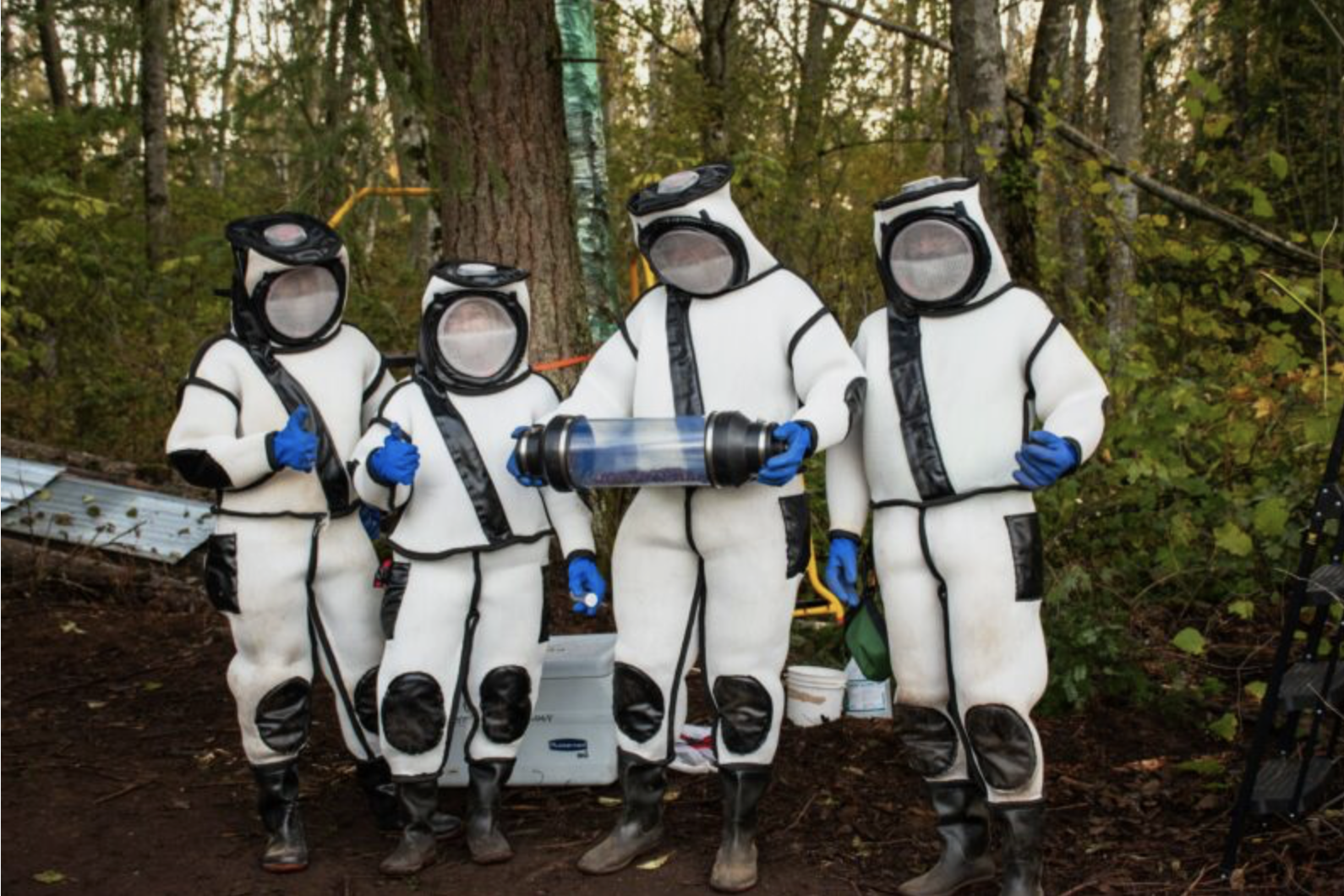 Previous outfits were found to be lacking and the wasp hunters did not have a huge budget:

Normal beekeeping outfits won’t cut it. Last year, when a Canadian team tackled an Asian giant hornet nest in Nanaimo, British Columbia, where the hornet first turned up in North America, the person tasked with the extraction wore two pairs of pants as well as a Kevlar vest under his regular apiarist attire. Despite all that, he described the seven stings he suffered as “similar to having red-hot thumb tacks driven into the flesh.” So what’s an Asian giant hornet hunter to do? Head to Amazon, of course.

The agency ended up ordering about 15 of the $170 suits, which, according to the Amazon listing, are made by a company called Vevin. They’re advertised as professional anti-wasp, -hornet, and –yellow jacket protective apparel—though not specifically as being protective against Asian giant hornets. The one-piece suits are constructed of three layers: a 20-millimeter-thick slab of foam sandwiched between an inner and outer coating of soft plastic mesh. Black nylon taping reinforces the seams, zipper, and the top of the attached hood, where a battery-powered fan moves air around and keeps the wearer cool.

Source: What to wear when you’re battling giant, venomous hornets

The world’s best solar power schemes now offer the “cheapest…electricity in history” with the technology cheaper than coal and gas in most major countries.

That is according to the International Energy Agency’s World Energy Outlook 2020.

Republican states generate just over 50% of all renewable power in the US currently, but 2/3 of all wind and solar power

Climate Change Is Forcing the Insurance Industry to Recalculate

The Business Roundtable, a major trade association that includes the heads of some of the largest and most influential companies in the U.S. as members, is endorsing a “market-based mechanism” as part of a plan to sharply curb greenhouse gas emissions that cause climate change,

The move, which was first reported by POLITICO on Tuesday, throws the lobbying voice of those executives from companies with $7 trillion in annual revenues behind efforts to combat climate change, reflecting a stark division between the business community and the Trump administration.