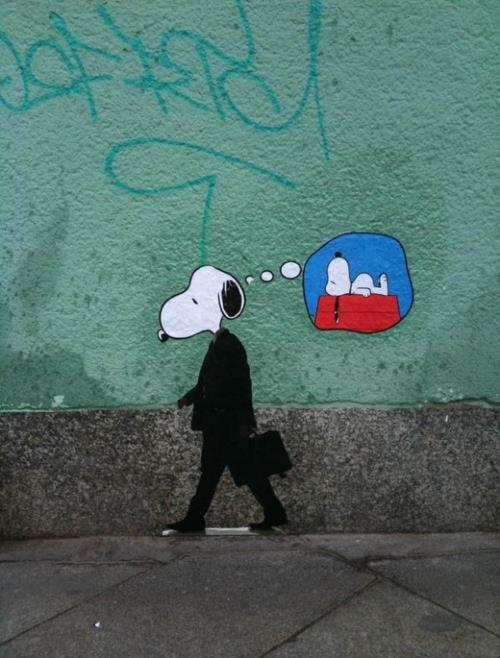 Values are also one of the core objectives of an Ohio Wesleyan education:

To place education in the context of values. Understanding of themselves, appreciation of others, the responsibilities of citizenship in a free society. Sensitivity to private and public value issues, intellectual honesty, concern for all religious and ethical issues.

I’ve compiled some information on the nature of values, as well as one collection of ten general types of human values.

Following that is a subset of human values which have been found to underlie human environmental beliefs and behaviors.

For the project in this course, review the material below and define (on one page in your chapter review) what you consider to be your own personal values. Please draw from the initial 10 types of values (from Schwartz) as well as the Four Types of Values related to Environmental Beliefs and Behaviors (Bouman) detailed below.

Don’t panic: you can be honest (even if you think some of your goals may not result in environmental betterment), and values can always change. This exercise is not a commitment.

Besides the course project, thinking about how values shape your environmental beliefs and behaviors should help you to shape your engagement at OWU and beyond, including appropriate post-OWU activities – education, careers, activism, etc.

Material below is quoted in a modified form from Schwartz, S. H. (2012). “An Overview of the Schwartz Theory of Basic Values.” Online Readings in Psychology and Culture, Unit 2. Retrieved from http://scholarworks.gvsu.edu/orpc/vol2/iss1/11 (source)

The Nature of Values

When we think of our values, we think of what is important to us in life. Each of us holds numerous values (e.g., achievement, security, benevolence) with varying degrees of importance. A particular value may be very important to one person but unimportant to another. Six main features of values:

(1) Values are beliefs linked inextricably to affect. When values are activated, they become infused with feeling. People for whom independence is an important value become aroused if their independence is threatened, despair when they are helpless to protect it, and are happy when they can enjoy it.

(2) Values refer to desirable goals that motivate action. People for whom social order, justice, and helpfulness are important values are motivated to pursue these goals.

(3) Values transcend specific actions and situations. Obedience and honesty values, for example, may be relevant in the workplace or school, in business or politics, with friends or strangers. This feature distinguishes values from norms and attitudes that usually refer to specific actions, objects, or situations.

(4) Values serve as standards or criteria. Values guide the selection or evaluation of actions, policies, people, and events. People decide what is good or bad, justified or illegitimate, worth doing or avoiding, based on possible consequences for their cherished values. But the impact of values in everyday decisions is rarely conscious. Values enter awareness when the actions or judgments one is considering have conflicting implications for different values one cherishes.

(5) Values are ordered by importance relative to one another. People’s values form an ordered system of priorities that characterize them as individuals. Do they attribute more importance to achievement or justice, to novelty or tradition? This hierarchical feature also distinguishes values from norms and attitudes.

(6) The relative importance of multiple values guides action. Any attitude or behavior typically has implications for more than one value. For example, attending church might express and promote tradition and conformity values at the expense of hedonism and stimulation values. The tradeoff among relevant, competing values guides attitudes and behaviors (Schwartz, 1992, 1996). Values influence action when they are relevant in the context (hence likely to be activated) and important to the actor.

The above are features of all values. What distinguishes one from another is the type of goal or motivation that it expresses. The values theory defines ten broad values according to the motivation that underlies each of them. 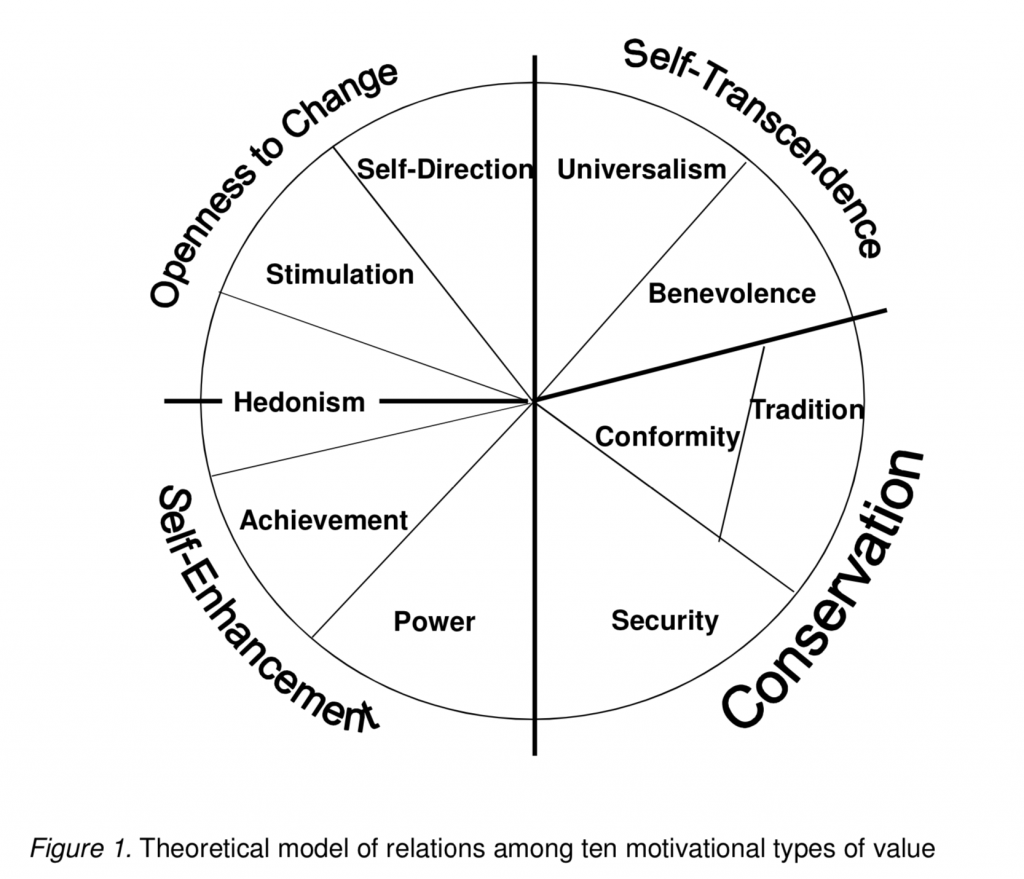 I next define each of the ten values in terms of the broad goal it expresses, note its grounding in universal requirements, and refer to related value concepts. To make the meaning of each value more concrete and explicit, I list in parentheses the set of value items included in the first survey instrument to measure each value. Some important value items (e.g., self-respect) have multiple meanings; they express the motivational goals of more than one value. These items are listed in brackets.

(2) Stimulation: Defining goal: excitement, novelty, and challenge in life. Stimulation values derive from the organismic need for variety and stimulation in order to maintain an optimal, positive, rather than threatening, level of activation. This need probably relates to the needs underlying self-direction values. (a varied life, an exciting life, daring)

(3) Hedonism: Defining goal: pleasure or sensuous gratification for oneself. Hedonism values derive from organismic needs and the pleasure associated with satisfying them. Theorists from many disciplines mention hedonism. (pleasure, enjoying life, self-indulgent)

(5) Power: Defining goal: social status and prestige, control or dominance over people and resources. The functioning of social institutions apparently requires some degree of status differentiation. A dominance/submission dimension emerges in most empirical analyses of interpersonal relations both within and across cultures. To justify this fact of social life and to motivate group members to accept it, groups must treat power as a value. Power values may also be transformations of individual needs for dominance and control. Value analysts have mentioned power values as well. (authority, wealth, social power) [preserving my public image, social recognition] Both power and achievement values focus on social esteem. However, achievement values (e.g., ambitious) emphasize the active demonstration of successful performance in concrete interaction, whereas power values (e.g., authority, wealth) emphasize the attainment or preservation of a dominant position within the more general social system.

(6) Security: Defining goal: safety, harmony, and stability of society, of relationships, and of self. Security values derive from basic individual and group requirements. Some security values serve primarily individual interests (e.g., clean), others wider group interests (e.g., national security). Even the latter, however, express, to a significant degree, the goal of security for self or those with whom one identifies. (social order, family security, national security, clean, reciprocation of favors) [healthy, moderate, sense of belonging]

(7) Conformity: Defining goal: restraint of actions, inclinations, and impulses likely to upset or harm others and violate social expectations or norms. Conformity values derive from the requirement that individuals inhibit inclinations that might disrupt and undermine smooth interaction and group functioning. As I define them, conformity values emphasize self-restraint in everyday interaction, usually with close others. (obedient, self-discipline, politeness, honoring parents and elders) [loyal, responsible]

(8) Tradition: Defining goal: respect, commitment, and acceptance of the customs and ideas that one’s culture or religion provides. Groups everywhere develop practices, symbols, ideas, and beliefs that represent their shared experience and fate. These become sanctioned as valued group customs and traditions. They symbolize the group’s solidarity, express its unique worth, and contribute to its survival. They often take the form of religious rites, beliefs, and norms of behavior. (respect for tradition, humble, devout, accepting my portion in life) [moderate, spiritual life] Tradition and conformity values are especially close motivationally; they share the goal of subordinating the self to socially imposed expectations. They differ primarily in the objects to which one subordinates the self. Conformity entails subordination to persons with whom one frequently interacts—parents, teachers, and bosses. Tradition entails subordination to more abstract objects—religious and cultural customs and ideas. As a corollary, conformity values exhort responsiveness to current, possibly changing expectations. Tradition values demand responsiveness to immutable expectations from the past.

(9) Benevolence: Defining goal: preserving and enhancing the welfare of those with whom one is in frequent personal contact (the ‘in-group’). Benevolence values derive from the basic requirement for smooth group functioning and from the organismic need for affiliation. Most critical are relations within the family and other primary groups. Benevolence values emphasize voluntary concern for others’ welfare. (helpful, honest, forgiving, responsible, loyal, true friendship, mature love) [sense of belonging, meaning in life, a spiritual life]. Benevolence and conformity values both promote cooperative and supportive social relations. However, benevolence values provide an internalized motivational base for such behavior. In contrast, conformity values promote cooperation in order to avoid negative outcomes for self. Both values may motivate the same helpful act, separately or together.

(10) Universalism: Defining goal: understanding, appreciation, tolerance, and protection for the welfare of all people and for nature. This contrasts with the in-group focus of benevolence values. Universalism values derive from survival needs of individuals and groups. But people do not recognize these needs until they encounter others beyond the extended primary group and until they become aware of the scarcity of natural resources. People may then realize that failure to accept others who are different and treat them justly will lead to life-threatening strife. They may also realize that failure to protect the natural environment will lead to the destruction of the resources on which life depends. Universalism combines two subtypes of concern—for the welfare of those in the larger society and world and for nature (broadminded, social justice, equality, world at peace, world of beauty, unity with nature, wisdom, protecting the environment)[inner harmony, a spiritual life].

Material below is quoted in a modified form from “Measuring Values in Environmental Research: A Test of an Environmental Portrait Value Questionnaire,” Thijs Bouman, Linda Steg and Henk A. L. Kiers, Frontiers in Psychology, 23 April 2018 (source)

A modified (and shorter) list of human values which underlie human environmental beliefs and behaviors draws from the above ten values.

Values are typically organized on a circular complex, consisting of a ‘self-transcendence’ to ‘self-enhancement’ dimension and an ‘openness to change’ to ‘conservation’ dimension.

The table below details the four human values which underlie human environmental beliefs and behaviors along with specific examples (in the E-SVS and E-PVQ columns): 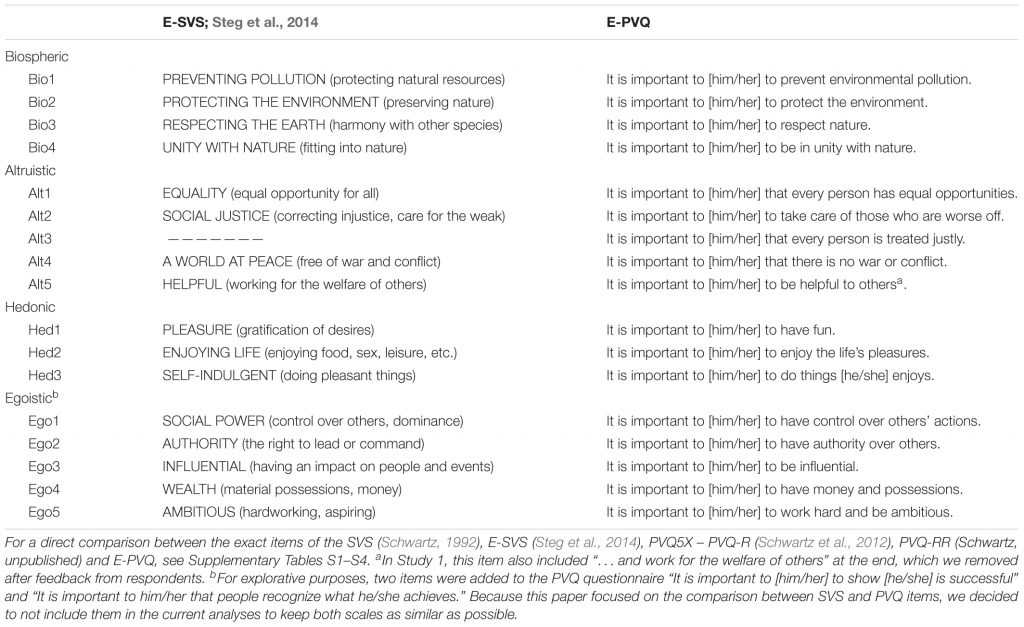