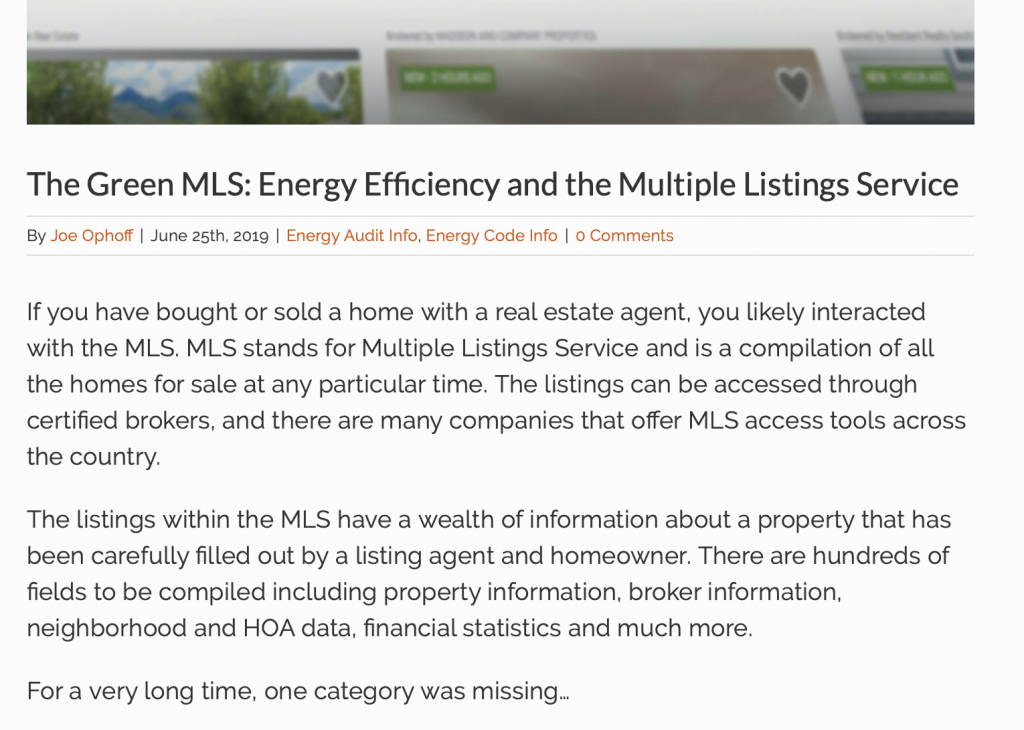 Until recently, there was no place within the MLS to list energy-saving equipment, energy ratings, or ENERGY STAR certifications.

To address this concern the National Association of Realtors formed a group entitled, The Green REsource Council. This group has helped to “green” the MLS and define the energy efficiency fields and information that should be added to listing service software across the country.  As these additional fields are implemented, buyers will look to these areas to be further informed about the home before purchasing. 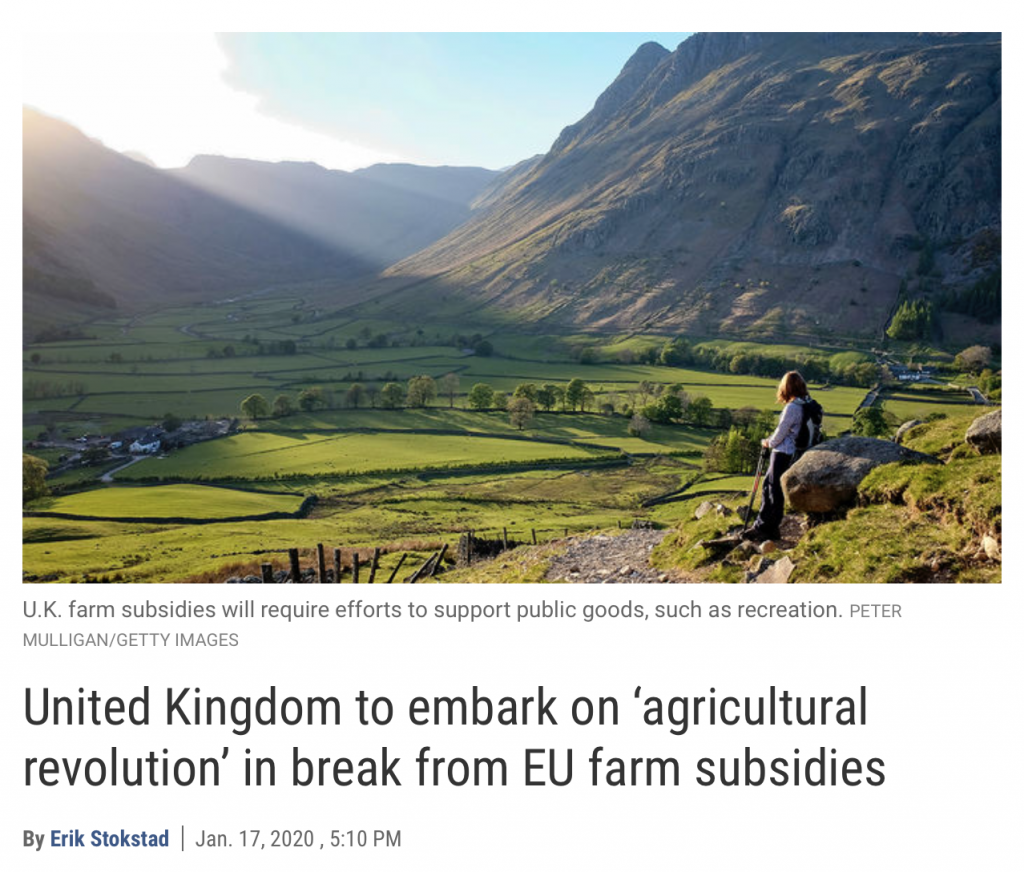 A significant environmental benefit of Brexit and model for other countries: rational, environmentally sustainable agriculture:

After the United Kingdom leaves the European Union at the end of the month, it will sever ties with Europe’s farm subsidy policies—and to many researchers, that is a good thing. This week, the U.K. government proposed radical changes to £3 billion a year in agricultural spending that will focus the money on benefits to climate, ecosystems, and the public.

Under the bill, introduced to Parliament this week and expected to become law within a few months, farmers will be given subsidies not simply for cultivating land—the current EU system—but for delivering “public goods.” These include sequestering carbon in trees or soil, enhancing habitat with pollinator-friendly flowers, and improving public access to the countryside. To ease the transition, direct subsidies will be phased out over 7 years beginning in 2021, and the new payments for environmental services will be tested in pilot projects.

After the destruction and starvation of World War II, European tariffs helped protect farmers from foreign competition and subsidies boosted their yields. “It was just about production, it didn’t matter what you did to the environment,” says Ian Bateman, an environmental economist at the University of Exeter. 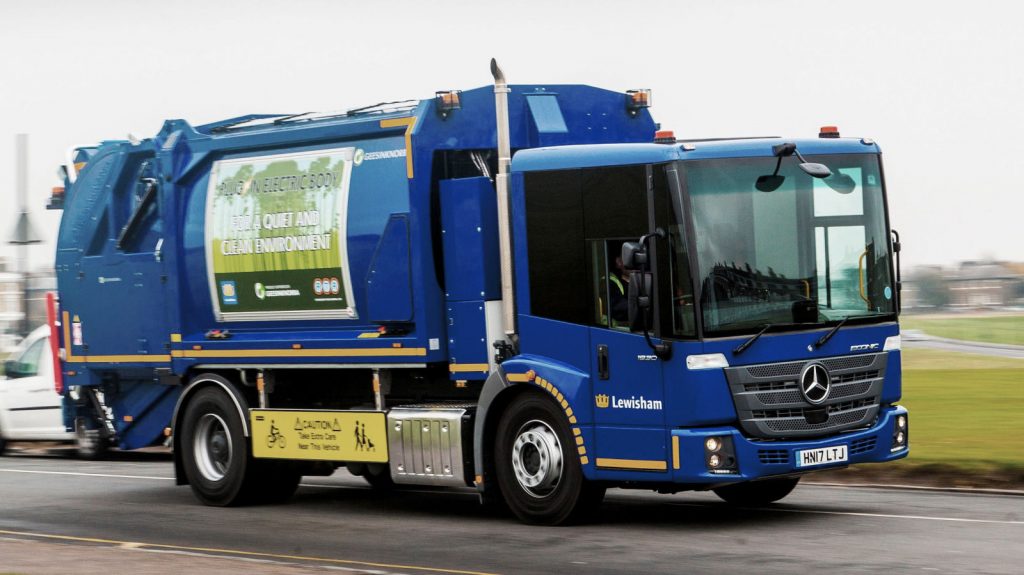 Garbage trucks are great candidates for electrification. They frequently need a lot of low-speed torque. There are electric motors powering hydraulic pumps that move all sorts of arms and whatnot. They drive a known distance before being parked at a central location. And of course, all that stop and go driving could be more efficient with regenerative braking.

EVs are also quieter, which would be nice, and of course, they would be locally emissions-free. Garbage trucks are really one of the best candidates for electrification.

The eActros has a 250 kW motor fed by a 240 kWh battery, presumably this will be shared with the garbage truck variant. Customer testing will start next year with series-production beginning in 2022. 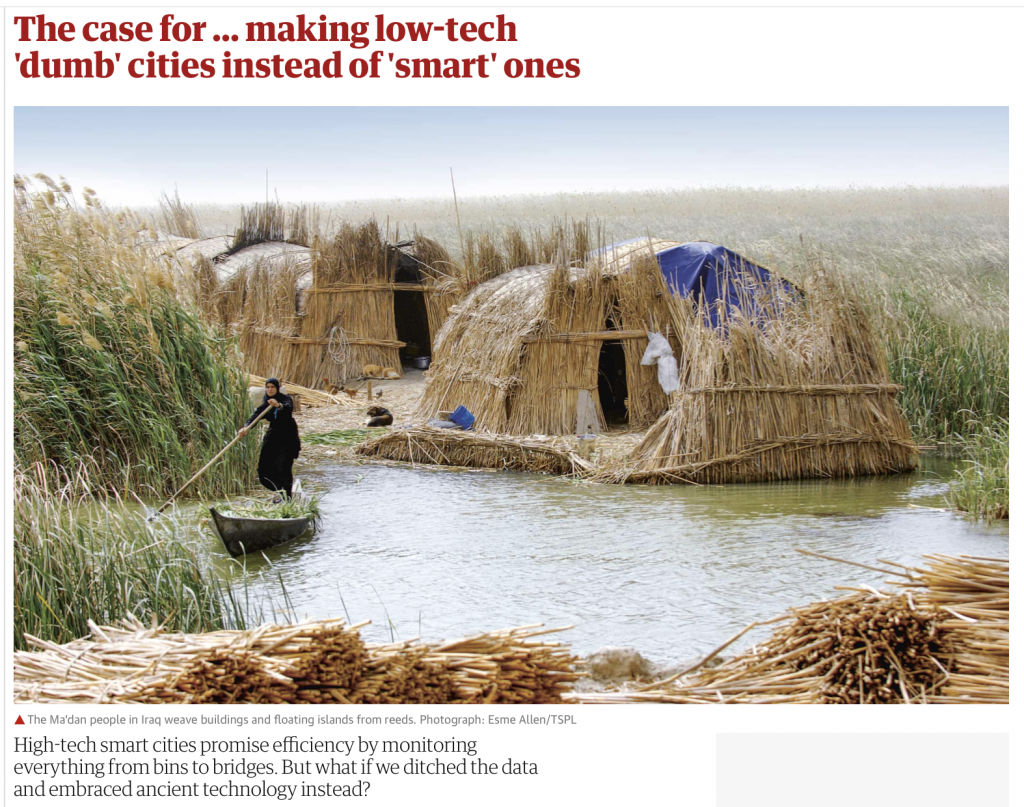 Source: The Guardian, “The case for … making low-tech ‘dumb’ cities instead of ‘smart’ ones”

There’s old, and then there’s old – and for urban landscapes increasingly vulnerable to floods, adverse weather, carbon overload, choking pollution and an unhealthy disconnect between humans and nature, there’s a strong case for looking beyond old technologies to ancient technologies.

It is eminently possible to weave ancient knowledge of how to live symbiotically with nature into how we shape the cities of the future, before this wisdom is lost forever. We can rewild our urban landscapes, and apply low-tech ecological solutions to drainage, wastewater processing, flood survival, local agriculture and pollution that have worked for indigenous peoples for thousands of years, with no need for electronic sensors, computer servers or extra IT support.

Book: The Power of Lo—TEK: A global exploration of nature-based technology 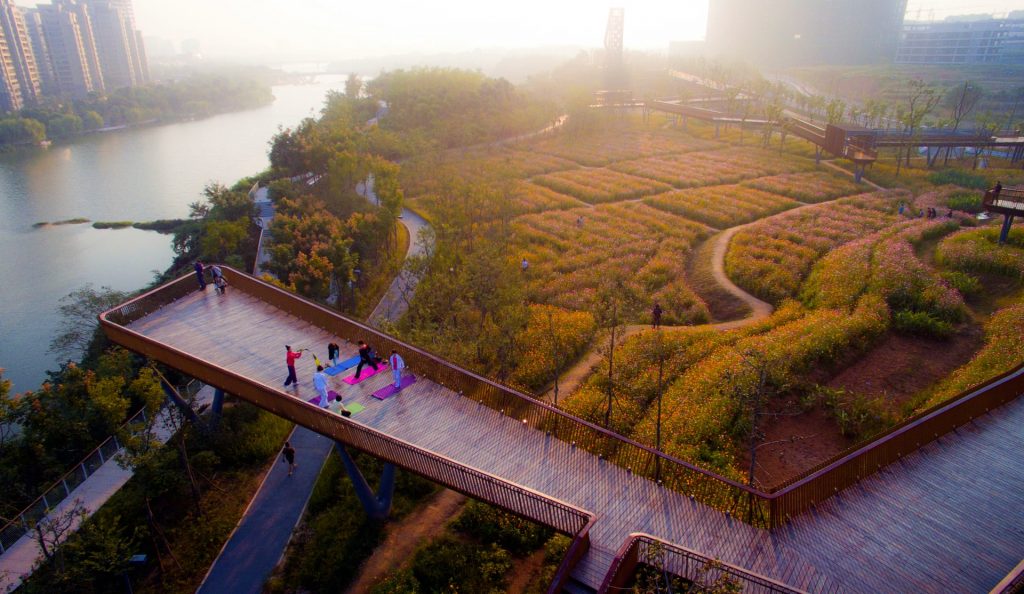 Article: The Conversation: Aboriginal fire management – part of the solution to destructive bushfires 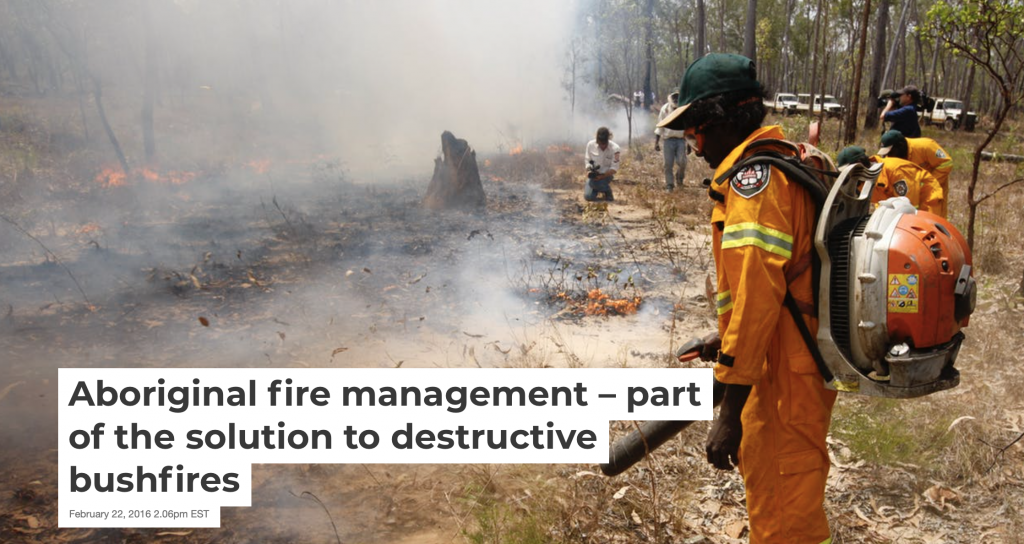 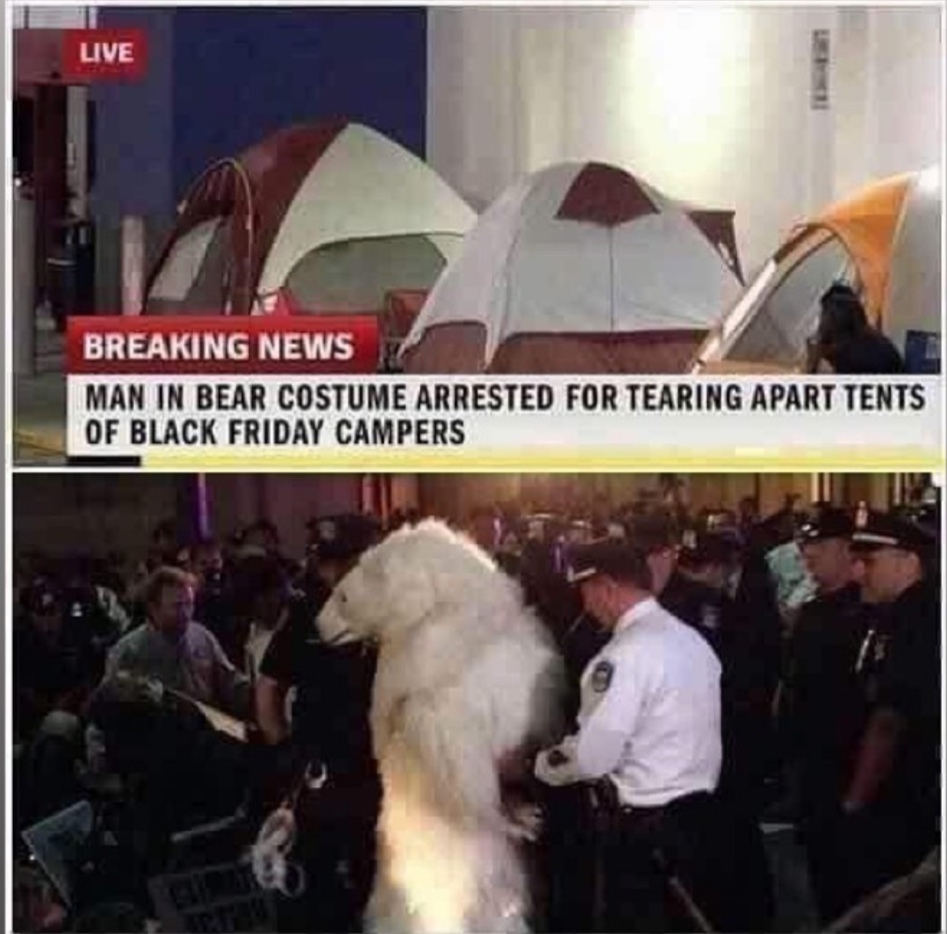 Not really, but still funny: Was a Man in Bear Costume Arrested for Tearing Apart Tents of Black Friday Campers? 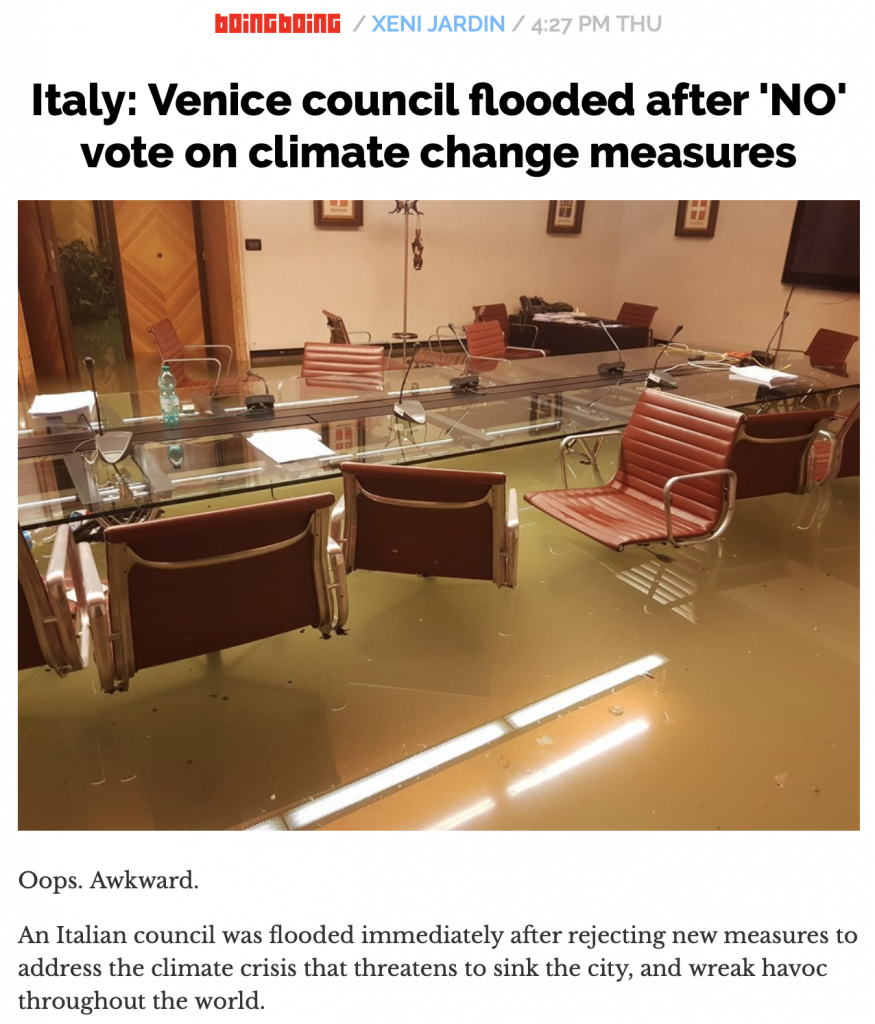 An Italian council was flooded immediately after rejecting new measures to address the climate crisis that threatens to sink the city, and wreak havoc throughout the world.

The regional council of Veneto is situated on Venice’s Grand Canal. On Tuesday night, the office flooded for the first time in its history, right after rejecting measures to fight climate change. 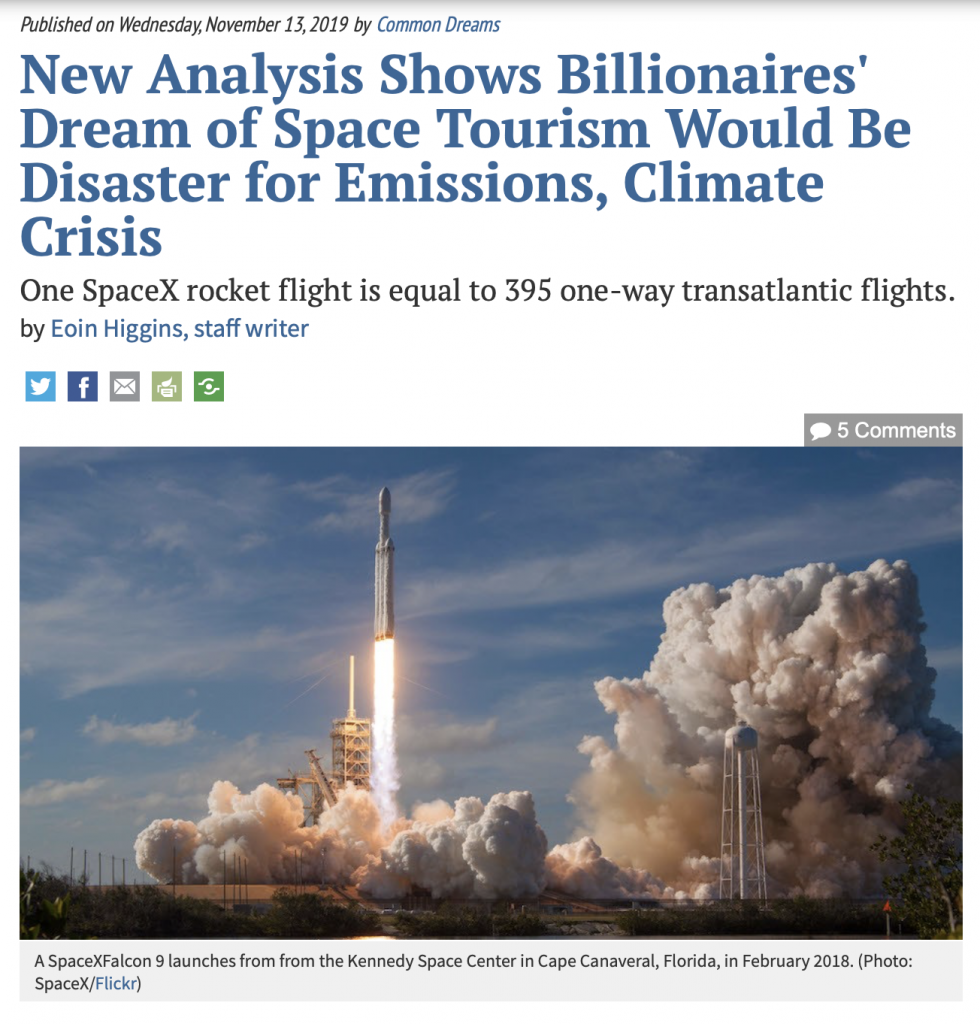 More: One SpaceX Rocket Launch Produces the Equivalent of 395 Transatlantic Flights worth of CO2 Emissions 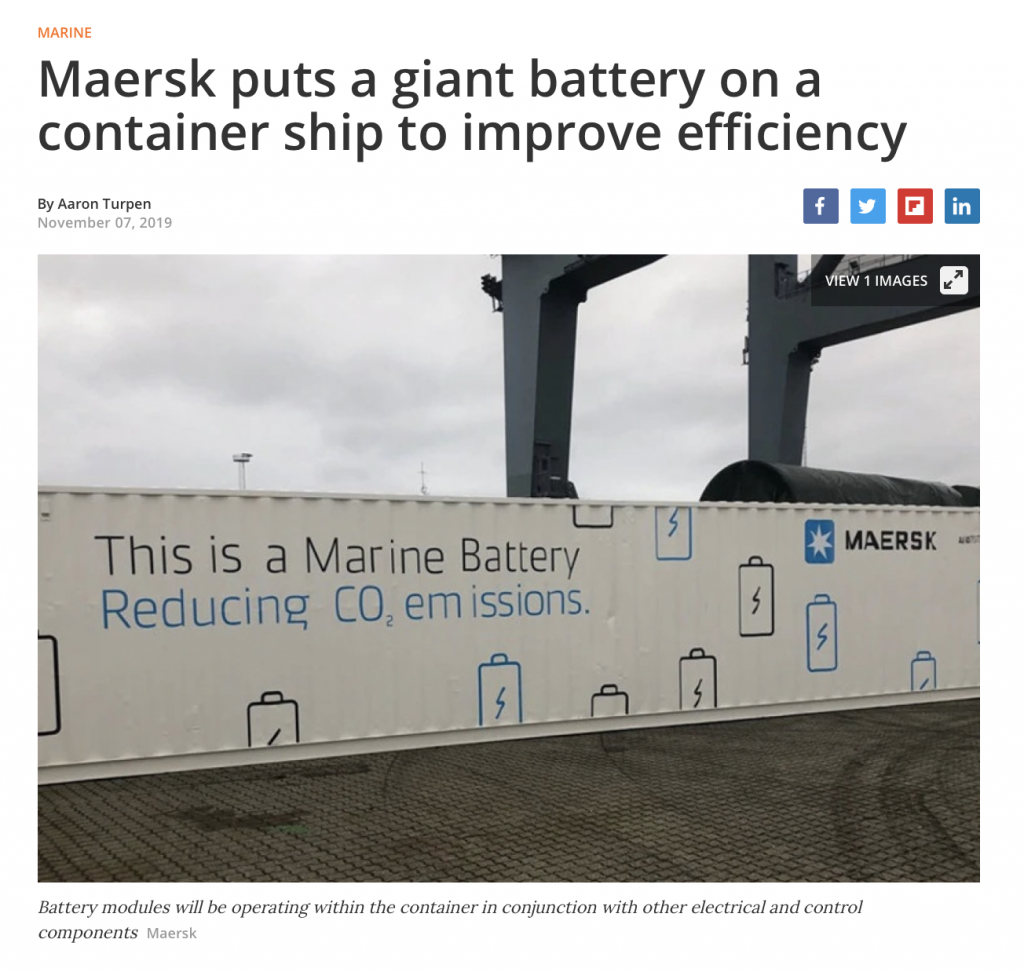 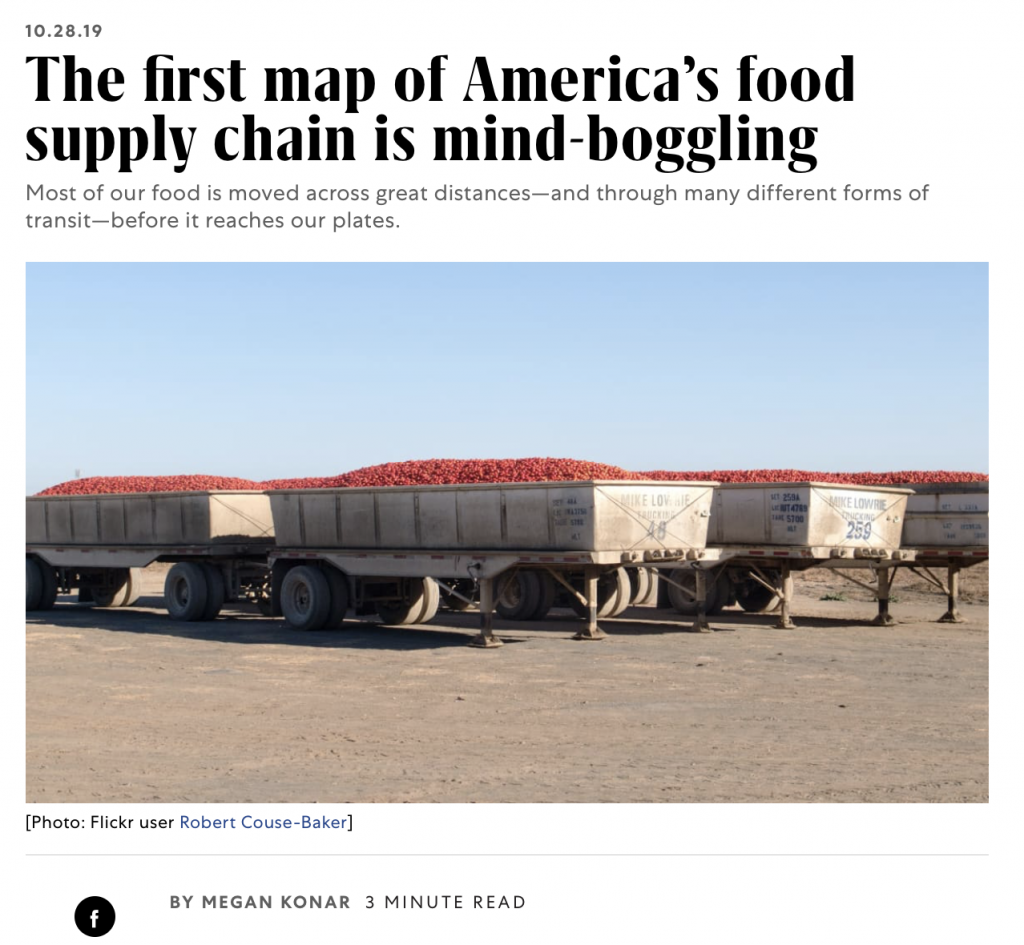 Residents in each U.S. county can see how they are connected to all other counties in the country via food transfers. Overall, there are 9.5 million links between counties on our map.

All Americans, from urban to rural are connected through the food system. Consumers all rely on distant producers, agricultural processing plants, food storage like grain silos and grocery stores, and food transportation systems.

Below: Maps of food flow networks within the United States. Maps depict total food flows (tons) for the (A) FAF and (B) county scale. Links are shown for all FAF data and for the largest 5% of county links. 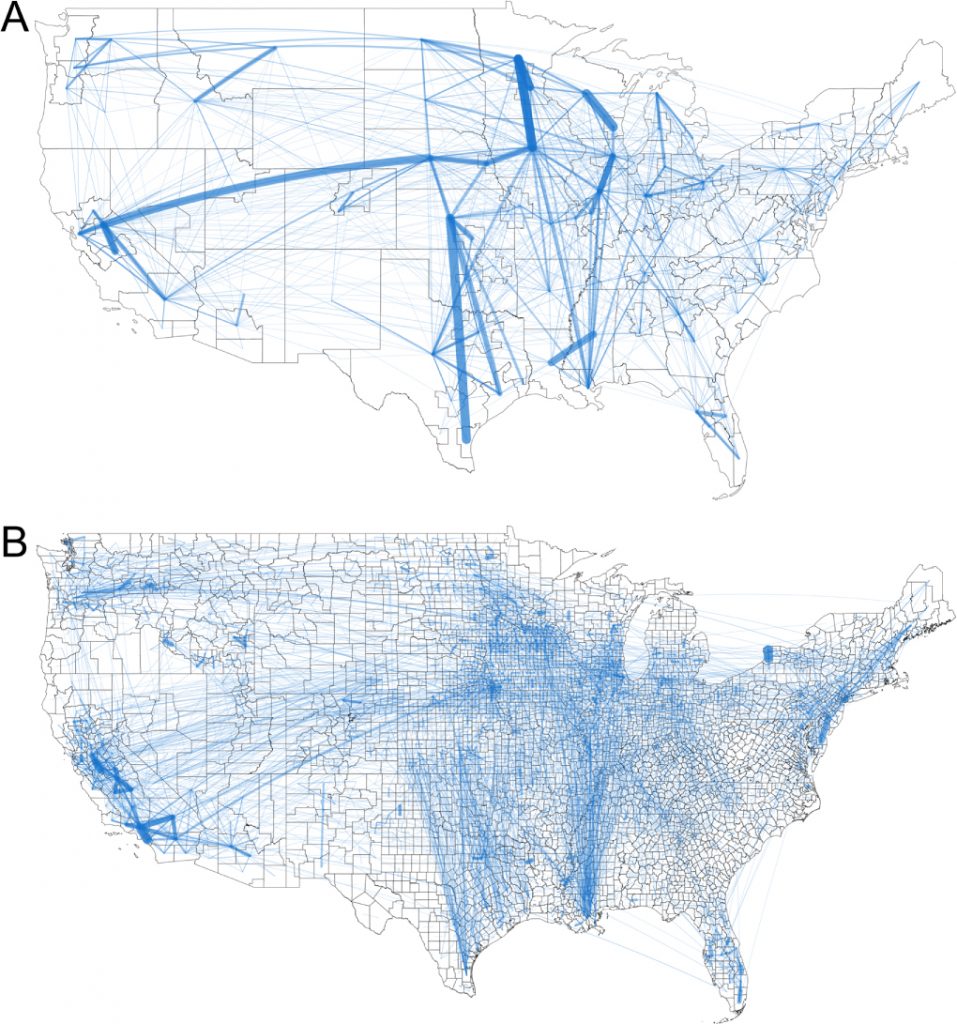