In the Spring 2019 semester I took Dr. Allison’s seminar on the aesthetics of British socialism. For this class we read William Morris’s News from Nowhere, a novel about a character who falls asleep and enters the future, where he finds it to be a socialist utopia. Before this seminar, I had taken multiple classes with Dr. DeMarco where I had read medieval romances–stories of knights going on quests and other adventures–so I caught on to a lot of medieval influences in News from Nowhere. When it came time for our mid-semester essay assignment, I naturally wrote about News from Nowhere as a medieval romance in disguise. Dr. Allison liked the idea. Alongside his essay feedback, he suggested I think about expanding the paper for the 2019 North American Victorian Studies Association (NAVSA) conference set for Columbus that October.

So now this paper, which stood at about ten pages, was to be expanded as my final essay for the seminar. I gathered suggestions of sources from Dr. DeMarco and Dr. Allison, read criticism by numerous scholars, including Alice Chandler, Gillian Beer, John Plotz, Suzanne O’Rourke Scanlon, Krishan Kumar, and more, and then took to writing the seminar’s final essay. I ended up finding more to write about than I had ever expected, and wrote far more than I was supposed to for the final paper. Luckily, Dr. Allison was fine with that. Having already decided to try for NAVSA, Allison gave me feedback again and I spent some of the summer refining and expanding the essay another time. Once NAVSA drew close, there were a few submission hurdles to go though, but NAVSA approved my work for their poster session, and thus I was in. 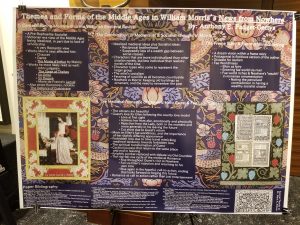 I spent some time in the Fall semester polishing the paper and, more importantly, designing a poster for the conference. Luckily, Morris was a famous artist, thus making the visuals of my poster quite easy. Once it was a digital file, OWU Duplicating made it up for me with the English Department’s assistance, and with that created, my only costs were a small fee to join NAVSA and whatever expenses I’d accrue driving to and from Columbus. The paper had now evolved from a mid-semester assignment, to a final essay, to longer and better organized versions, and now to a poster, all in the course of just over half a year.

Next came the conference. One undergraduate workshop, where we all met each other (there were around 20 undergrads presenting), and numerous panels later and the poster session came. I was nervous to start, especially as I knew the aforementioned John Plotz, who I block quoted twice, was at the conference, and of course, more generally, an entire crowd of professional scholars of the era. Luckily, advice from our poster session advisor, Nathan K. Hensley, helped build confidence. In the end, talking about my work was a lot of fun. Everyone was extremely kind, giving praise and admitting to being impressed by the poster session as a whole. I was told by Dr. Allison that Florence Boos, a great Morris scholar, gave my poster the thumbs-up, and thus confidence was no longer a question. Sadly, I never ran into Florence Boos or John Plotz, but I still met many scholars, and received some great suggestions of sources for digging even deeper into, and further evolving, the paper.

So, outside of presenting about the strong medieval influences on William Morris’s work and, more generally, his socialist ideas, what came from this experience? Well, a whole bundle of wisdom: Recognizing that even if you aren’t a professional scholar, if you have put time into researching something specific, you can become an expert on that subject. If a paper feels like it has legs to grow, you’ll be amazed at how far it can go. Scholars are both extremely nice, and extremely interested in what you have to say. It’s easy to feel like you don’t know where to start, but sources come like dominoes, experts you know lend great directions, and Google is, as always, an incredible guide as well. 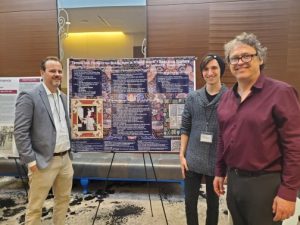 Anthony with Professors Allison and Hipsky

In the end, I’m still not a hundred percent done with Morris’s medieval News from Nowhere. Even just talking to people at the poster session, I thought of more to say in the paper on my own, without even including the new sources I’d been pointed to. Maybe the Morris paper will continue to grow even further in the next half-year or more. But at least, for now, it stands as proof that grand papers and projects don’t have to come from grand ambitions. Sometimes you stumble into them, and then they grow from there. In the meantime, if you want to read the paper as it stands, I have a link to it on my writing twitter, @OfficiallyAntt.