I did not come to Ohio Wesleyan to major in English. In fact, I was staunchly opposed to majoring in the discipline. For years, I was told that I would certainly be an English major because of my love for literature. I was determined to not live up to such an expectation. Instead, I knew that I would major in both Politics and Government and Spanish during my time at the University so that I could achieve my dream of becoming a policy analyst. However, this was not what life had planned for me. Little did I know that my “Reading the Global Kitchen” class with Dr. Nancy Comorau would change my trajectory completely. I took the class hoping that it would help me to secure a spot in her Spring travel learning course to Ireland. I had no idea that I would end up as an English major, let alone thinking about double concentrations in Creative Writing and Literature.

The books we read in that class, like The Language of Baklava, The Book of Salt, and Fasting, Feasting, absolutely fueled my passion for studying literature, and the conversations that we had in class surrounding craft, content, and overarching themes inspired me to learn more about the discipline, specifically postcolonial literature, on my own. I was introduced to authors that I would have otherwise never come across, perspectives that are vital to consider when reading the canon. I learned so much from this class; not only about myself and what I particularly enjoy when it comes to reading literature, but about the discipline as a whole and my thoughts on the literary canon itself. I was really considering changing my overall plan for my course of study.

I remember calling my mom after deciding to change my major, explaining to her that, while I had initially thought I would do anything other than English, I was mistaken: English was what I wanted to do; it was the only subject I could see myself studying for the long term. She was absolutely baffled. I was, too. I hadn’t even told her that I had decided to pick up an English class, and now I was telling her that I wanted to major in English? This was not something that either of us expected. I don’t think that I could have made a better decision, though. 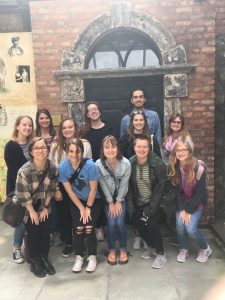 Photo of my travel learning class at the James Joyce Museum in Dublin, Ireland.

I was fortunate enough to go on that travel learning course with Dr. Comorau and, ever since, travel has been an integral part of my experience as an English major. Visiting Ireland changed my life and expanded my thinking about what it means to major in English. I was planning on studying abroad in Spain to coincide with a Spanish major, but now I will be studying in Belfast, Northern Ireland in the Fall of 2021, completing a senior capstone project for my Global Scholars program that focuses on my potential experiences with writers and nonprofit organizations while also integrating my English major. Last semester, I was supposed to go on another travel learning course with Dr. Comorau to England and study the British Muslim experience through literature. Unfortunately, that trip was postponed due to COVID-19; however, now I have an amazing background knowledge and itinerary for whenever international travel does become safe again. Currently, I am working for The Sturges Script on a travel-themed edition, continuing to incorporate the concept of traveling into my English major. It is one thing to write or speak about travel. Experiencing travel is completely different. I want to do both.