Did you know that one of Ohio Wesleyan’s founders was a civil rights champion? This week’s feature is especially exciting, because you can go see it for yourself! On display outside of the Special Collections section of Beeghly Library is some of the literature of the Western Freedmen’s Aid Commission (WFAC) and the Freedmen’s Aid Society (FAC). These were both organizations established in the wake of the Emancipation Proclamation in 1863 with the goal of improving the lives of enslaved people who had gained their freedom. And they both happen to have a special connection to Ohio Wesleyan: Adam Poe, president of the WFAC and one of the founders of the Freedmen’s Aid Society, is a crucial and defining figure in the history of our school.

Adam Poe was a leader in the Methodist Church, and is described by the Delaware County Historical Society as the “Morning Star” of Ohio Wesleyan , as he was the mastermind behind starting a university here in Delaware. Also featured is a letter Poe wrote to a local reverend in 1841 regarding the establishment of Ohio Wesleyan. With help from other Methodist leaders and Delaware residents, he worked to make Ohio Wesleyan a reality and, in 1842, was granted a charter “forever to be conducted on the most liberal of principles and accessible to all religious denominations.” 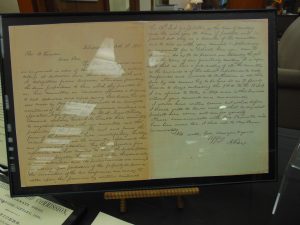