Homer’s Iliad is a work that almost every student of literature is bound to read at some point in their lives. It has been considered required reading literally for millenia. The Rare Books Collection has an edition of the Iliad published in 1660, translated by John Ogilby. It is a beautiful book, filled with annotations which summarize much of the previous scholarship on the Iliad. It also contains a biography of sorts of Homer, compiling what was known about the poet’s life as well as a comprehensive list of his works. Ogilby likely relies heavily on the Greek historian 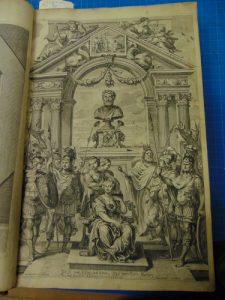 Herodotus for much of his information regarding Homer’s life. However, what Ogilby was most well-known for in his time and beyond (and what is arguably the true star of this piece) are the lavish illustrations that adorned the books he printed, commissioning illustrations from some of the most respected designers working in England at the time. This edition would likely have been considered quite the treasure when it was first published, and we certainly consider it a treasure today!