One of the most exciting parts of the Rare Books section in Beeghly is the Bayley/Walt Whitman Collection. This unique trove of materials includes many first or early editions of Whitman’s work, photographs of Whitman, and even a scrapbook put together by Whitman himself!

One of the most important pieces we have is a first edition of Whitman’s Leaves of Grass. Only 800 copies of the first edition were printed, and only 200 of those were printed in the signature green cloth cover. In fact, we have two first editions of Leaves of Grass, and they’re not the same. In fact, according to the research of OWU alumnus Ed Folsom, an expert in all things Walt Whitman, no two first editions of this particular work are exactly alike. One other particularly interesting thing is that after publishing the first edition in 1855 as a small book of only twelve poems, he continued to revise and add to it for most of his career, until the last edition published contained over 400 poems! In the second edition, he added a section entitled “Leave Droppings,” where he included reviews of the first edition. This section featured a handwritten letter to Whitman from fellow American poet Ralph Waldo Emerson, praising the first edition and offering his thoughts. Because Whitman had been inspired by Emerson to write the work and had such intense respect for him, Whitman carried a copy of the letter in his pocket wherever he went. 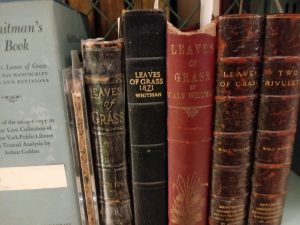