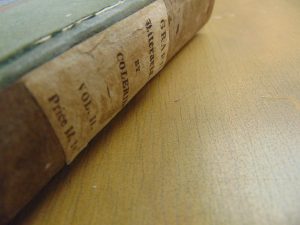 In Beeghly Library’s Special Collections section, one of the many treasures hidden in the shelves is a first edition of “Biographia Literaria; or Biographical Sketches of my Literary Life and Opinions” by Samuel Taylor Coleridge. What’s most special about OWU’s copy, though, is that it is from the personal library of William Wordsworth! Coleridge and Wordsworth were founding members of the Romantic movement in England during the first half of the 19th century. They were also close friends as well as neighbors, and held a great deal of respect for one another. Coleridge frequently mentions Wordsworth throughout the book, describing the first time they met as well as praising his artistic skill. Coleridge also discusses his own views on philosophy and the nature of poetry. It’s quite an interesting piece on its own, and that it was Wordsworth’s own copy only adds to the intrigue!

Autograph of Wordsworth on the first page of the Biographia Literaria