Being enrolled in a Travel-Learning Course (TLC) my freshman year (ENG 228: Re-placing Great Britain: Alternative Narratives of National Identity) was a highlight of my experience at OWU. It was my first international flight, and the class centered around subject matter that would broaden my worldview.

I still struggle to narrow down my favorite moments of the trip–in which we visited London, Liverpool, and Manchester in two too-short weeks–to even a top three. But, of course, as a Theatre major, some of these moments included the performances we attended: Twelfth Night done with a largely Nigerian cast at Shakespeare’s Globe, Miss Meena and the Masala Queens at Greenwich Theatre, a stand-up comedy show called Cakes by Bilal Zafar at the Soho Theatre, a poetry festival with Inua Ellams, and an interview/talk with Adrian Lester in the Sam Wannamaker Theatre at Shakespeare’s Globe. The art exhibits and museums we saw left me breathless, and the historical walking tours we took turned the way I looked at each city upside down. 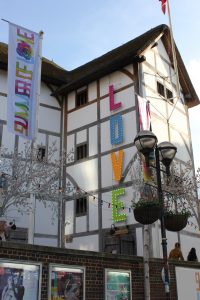 As part of the Globe Theatre’s “Summer of Love,” the group saw Twelfth Night performed by a Nigerian cast.

Academically, the class was challenging. I was a bit intimidated as the only first-year taking that particular TLC, but that made me aware of what an incredible opportunity I had and drove me to work harder.

Examining the ways England presents itself to the world, in comparison to the England known by immigrants, second- and third-generation residents, people whose first language is something other than English, people of color, and people who know England as a colonizer was eye-opening. Seeing England beyond its whitewashed cover is crucial to understanding and connecting with the nation’s culture. It was a piece of history and present-day social culture that I hadn’t been exposed to, and it changed the way I see the world around me.

I am grateful that the England I met in person for the first time was this one—full of people, languages, cultures, influences, ideas, and experiences from all over the world. And after having spent a semester becoming acquainted with England, I’ve now enrolled in another TLC (Shakespeare and the Sites of Performance) and will be visiting again in May 2018.

I hope to bring the perspective I gained from Re-placing Great Britain: Alternative Narratives of National Identity to my studies and travels with Shakespeare and the Sites of Performance. I cannot wait to see where my new adventure will lead.

As an English and Theatre double major and Spanish minor, Sarah Gielink ’20 gets to read and write a lot, occasionally forgetting which language she’s supposed to use when. But she wouldn’t have it any other way. 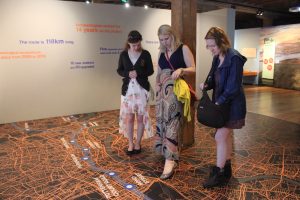 As part of their trip to London, the class visited the “London, Sugar and Slavery” exhibit at the Museum of London Docklands.

All photos by Jordyn Hollenbeck ’18.

One Reply to “Sarah Gielink: A Whole New Worldview–Travel Learning as a First Year”