Officer Rita Mendel of the Delaware Police Department deals with the homeless population on a regular basis.

As the population increases, so has the number of those living on the streets.  Delaware has recently been pronounced the fastest growing county in Ohio.  Although several members of the community have seen a rise in homelessness,  a recent article in the Delaware Gazette claimed “homelessness is a well-kept secret here”.

The issue was brought to the city’s attention when a couple librarians at the Delaware County Library began a petition for there to be a homeless shelter.  In the petition, it stated that “This is a critical situation in Delaware,” citing a story of a young man in December 2014 who stopped breathing in Andrews House, the headquarters for six local social service agencies.

“An ambulance was called and he was rushed to the hospital. After numerous test, they stated that he had bronchitis. They gave him some medication and sent him back out in the cold. Had he not been at the Andrew’s House, he probably would have died, ” according to the petition.

Quickly the petition circulated quickly on Facebook, gaining signatures. By spring 2015 it had 332 signatures. City Council held a meeting to discuss the issue in January of 2015.

A collaborative committee was quickly formed to find a solution. It includes Beth Fetzer-Rice from the Salvation Army, Brandon Feller from United Way, Mayor Carolyn Kay Riggle, City Manager Tom Homan, and many more key players.  The committee is currently debating the location of a possible warming shelter (this meaning, a covered and heated area that would be open during the winter for homeless individuals to go into to keep warm).

Part of the problem the committee is facing is that they have no funding. Funding for programs to help the homeless primarily comes from the Housing and Urban Development (HUD) department of the federal government.

Every January, HUD selects one day for every county across the nation to go out and document as many homeless individuals as they can find. This is called the Point-in-Time count. According to Brandon Feller, the president of United Way, it is not an accurate depiction of the situation.

“The count does not allow us to include Delaware citizens who are staying at the shelter in Marion, Ohio,” said Feller. Roughly 50 to 60 Delaware individuals stay there each year. “Plus the count is done at one of the coldest times of the year, when people are most likely couch surfing and doubling up,” Feller added.

The 2014 Point-in-Time Count report shows the magnitude of the issue in each state. The results of the 2015 count that occurred on Jan. 22 are still be calculated.

The Delaware Police Department knows most of the individuals on the street by name.  Mendel said she knows of at least seven individuals and where they tend to stay. According to police records, the address of a homeless person in their system is listed as “streets of Delaware.”

The police have been know to offer rides on their own time to the closest shelter in Marion. Officers have even let individuals sleep in the station’s lobby to keep warm. 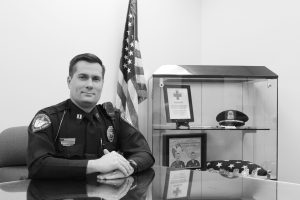 City Manager Tom Homan, shares his thoughts on the homelessness situation in Delaware.