It’s easy to forget how big this country really is. I too often am swept up in visions of Paris and Vienna and Buenos Aires, and forget that Savannah, Georgia is as different from my hometown of Columbus, OH as it is from any of those cities. Or that Texas has a culture all of its own. Or that Nebraska has a population of just under two million people, who I know absolutely nothing about. For some time now, I have wanted to pack up my car, leave my passport safe in its drawer, and just witness the United States. 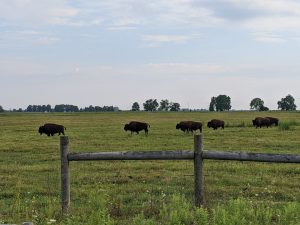 Bison graze in Battelle Darby Creek Metro Park, on the west side of Columbus.

Throughout this strange, limited semester, I have tried to visit as many metro parks and hiking trails as possible, packing food to avoid restaurants and carrying generous quantities of hand sanitizer. Highbanks Metro Park is only about a twenty-minute drive from campus, and its trails are perfect for hiking or running. An hour south is Battelle Darby Creek Metro Park, where you can stroll between meadows where bison wander among wildflowers. (The last time I was there, I got to see a bison run: its shaggy hair was smoothed back by the wind, and I could imagine for a moment the awe that a great herd of stampeding bison must have once inspired.)

Many of our most beautiful trails are near small towns, so often forgotten. Recently I visited Hinton, West Virginia, to go hiking nearby. Hinton surpassed my expectations: once an important rail stop in the era of coal, its tree-lined historic streets are wedged close together and surrounded on three sides by the New River. Many of the houses and shops were built in the 1890s and early twentieth century, and like everywhere in West Virginia, there are many historic markers. 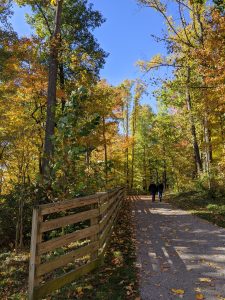 A hiking trail in Cuyahoga Valley National Park, in northern Ohio, where visitors can walk along the remnants of the historic Erie Canal.

In the next year, international travel might still be impossible, and even domestic flights might be ill-advised. Even if public health improves enough to allow travel, many of us have experienced financial strain that will make jet-setting difficult. But I know there are hundreds, if not thousands, of towns like Hinton across the country. Each has its own quirky festivals and traditions, its own stories and historical societies. I was in Paintsville, KY when the Kentucky Apple Festival would normally have occurred, and the owner of an antique shop gave me a paper bag full of apples to take home, since with no festival there was a surplus of apples. New Orleans has a version of San Fermin in which participants are chased by people on roller skates instead of bulls. Florida has a festival devoted entirely to geckos. And of course, there are all those roadside attractions in-between: pick-your-own berry farms and objects of record-breaking size.

I’m often frustrated with my country, for many reasons, including its lack of public transportation and obsession with cars. But I can’t deny that our unprecedented ability to drive anywhere provides an opportunity to connect with people in small towns across the nation, to appreciate the beauty of our countryside, and to get out of whatever we are living in and travel on our own terms. As restrictions ease and treatments medical knowledge improves, I look forward to seeing more of this great and complicated land.