Sturges Hall is the place we call home, but did you know that it has changed in purpose, design, and identity many times since its construction in 1885? Click on the slide show below to discover some of its wide-ranging metamorphoses over 130 years! 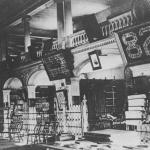 It is poetically just that Sturges Hall is now home to the English and Comparative Literature departments because its origins are intimately connected with books. Indeed, Sturges Hall was originally Sturges Library. Named after William Sturges, who contributed 7000 volumes to the original collection, our hallowed hall was completed in 1855. Similar in spirit to the study room in Slocum, Sturges was distinguished by unique alcoves (pictured above) positioned around the periphery of the reading room. It is in these alcoves that the books were kept. One edition of the Transcript published in 1877 writes that “campus loungers who have one bell to spend between recitations would gladly loiter in the library.” 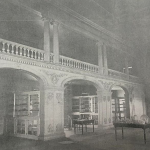 Under the pressure of climbing enrollments and shrinking space across campus, in 1895 ground broke on Slocum Library as part of a flurry of construction projects during the tenure of President Bashford, bringing Sturges’s chapter as OWU’s main library to an end. Instead, it became a repository of a different sort: home to the mineralogical and geological specimens of Ohio Wesleyan’s Natural History Museum, which were distributed across Sturges, Merrick, and the “Science Hall.” These collections were known by most students and faculty as “the cabinets,” as a nod to their display cases located within the alcoves (pictured above). 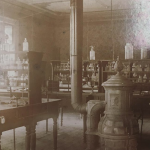 Gurgle, gurgle, fizz, fizz! In the early twentieth century, Sturges underwent another major transformation, this time under the auspices of the sciences. Indeed, by 1907, Sturges had metamorphosed into the home of the Department of Chemistry, which had been hopping between buildings for a number of years. However, it’s worth noting that up until the 1930s, no lab work was required of Chemistry students. According to Clyde Hubbard, author of Ohio Wesleyan’s First Hundred Years, this may have been because for a number of years there was only one chemistry professor. 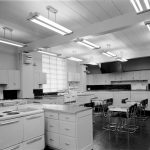 Today, professors in the English and Comparative Literature departments still enjoy bringing food and baked goods to stressed out students during final exams and end-of-year festivities, but seventy years ago Sturges Hall would have been filled with the scents and sounds of food preparation every day. That’s because in 1947 Sturges Hall was renovated to house the Department of Home Economics and the Secretarial School. Subjects covered included cooking and sewing, and the department hosted an annual “style show” followed by a tea party in the building as well! Does anyone else think we should resuscitate this tradition? 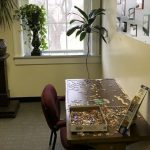 Now, of course, Sturges Hall is the home to the Departments of English and Comparative Literature (formerly Humanities-Classics). A locus amoenus to majors, minors, and literary enthusiasts of all stripes, one of Sturges’s most characteristic contemporary features are the puzzles scattered throughout its second and third floors. If you wander upstairs, you’re sure to find a student (or even a faculty or staff member) de-stressing by trying to add a few pieces. This is the core of what Sturges is all about: no matter what is contained inside it, whether library, laboratory, kitchen, or classroom, it has always provided a cozy environment for individual and collective contemplation to the students of Ohio Wesleyan!