George Cruikshank was a 19th century British caricaturist best known for illustrating his friend Charles Dickens’s novels, such as Oliver Twist. One of the more interesting (and amusing) of his works that we have in the library, though, is his Comic Almanack. A little bit like the The Onion today, it contained cartoons and sociopolitical satire. One of the pieces it features is a comedic horoscope, in which he advises those born in March that “now is the time to force your cucumbers, but if they will not come by being forced, try what can be done by persuasion. All of your efforts will be useless if your cucumbers are not in the right frame of mind”! He also includes a list of “popular errors,” pictured here. Incredibly popular during its time, one edition a year was published between 1835 and 1853, and it is said that his attacks on the royal family were so severe that King George even paid him off not to caricature him! 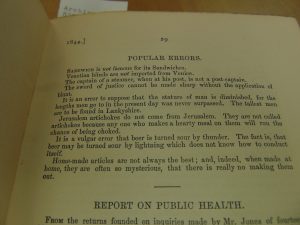