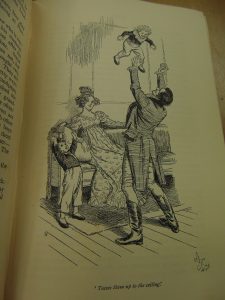 Jane Austen is one of the most influential writers of the Western canon. She wrote novels which were, for their time, rather subversive, – depicting women exercising autonomy, highlighting class differences, and generally challenging the status quo. She was also the age of many college students when she wrote Pride and Prejudice, only 20 years old (which makes me feel like I really ought to hurry up and do something important). Emma, however, was one her later works: she began writing it when she was 39 years old, and finished two years later. It is also regarded by some to be her best work, and many argue that Austen more or less invented the literary device of free-indirect style in the book. It was initially published in 1815, but Special Collections happens to have a specific edition containing illustrations by Hugh Thompson published in 1896.  It is an incredibly ornate book: The cover is decorated with gold leaf in ornate floral designs.The illustrations are detailed and playful, and certainly one can imagine reading this when it was first published in the nineteenth century!