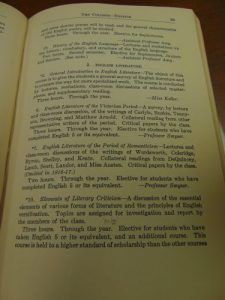 Have you ever wondered what it would have been like had you attended OWU 100 years ago? A peak into the 1918-1919 Ohio Wesleyan University Catalog provides some fascinating insight into this question.

Campus life 100 years ago would certainly have looked different than it does now, for a number of reasons. You wouldn’t have been taking your English classes in Sturges Hall, since it was the home of the Chemistry department at the time. But can you imagine only having to pay $50 in tuition? Or the school being separated into a men’s and a women’s campus? The catalog also proudly describes Merrick Hall as having electrical outlets in every room. Things have certainly changed!

However, there are many aspects that are similar. The English major requires many of the same things now as it did then. For instance, we still have two separate literature and writing tracks. We still require English literature classes, and there are some individual classes listed in the 1918 catalog that we still offer today, such as History of the English Language! (Personally, I think we should bring back Old English as a class. I would take it!) 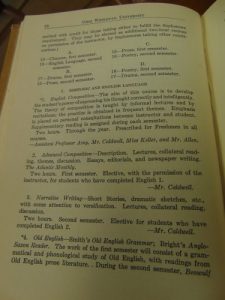 This coming Monday! Join us in the Milligan Room f