I talk about the fact that I’m from Portland often, with much chagrin from my Midwest-native friends. In my mind, Portland has always been the heartbeat of the Pacific Northwest, a concrete blossom among some of the most creative and bold people in the world. The city has always felt electrically alive.

I must admit, though, that talking about Portland like this makes me feel like little more than a stereotype, like I am penning an undeserved love letter to the overrated city I never technically lived in. I abandoned my suburb, West Linn, immediately after high school, fleeing as far east as I could stand to escape the expectations of suburbia: going to an in-state university, majoring in “something reasonable,” trekking back up to the suburbs, and having a family and a white picket fence by 30. Like many of my peers, I wanted to experience something beyond my little bubble. 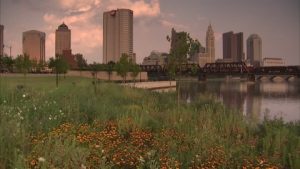 Despite the stereotypes of the Midwest, Ohio felt like the best place for me to subvert these norms. The freedom of August and September, driving too fast past corn fields with the windows down, nurtured that pleasant escapism. The 2,500-mile distance from everything I once knew began to wear me down as the semester continued, though. I realized that I hadn’t appreciated the world around me and the accepting culture I had grown up in. My homesickness came on quickly, like a midwinter cold, when the freezing temperatures of November hadn’t cut through to snow but everything around me was flat, the same shade of taupe, and dead. That freedom from the fall was gone, and I started weaving tales of Portland to anyone who would listen.

When you create a vision of somewhere in your head, building it up over the course of months and years, what happens when you try returning?

My last summer back home, I spent a day riding the light rail through Portland city limits. The light rail has always felt like the future, but this time I forced myself to reconcile with the new realities of the city rushing past, noting the ways it had changed around me. Granted, things always change over time, but my commute allowed me to see it like a photo album where Portland has become little more than a series of snapshots.

In the past three years, Portland has grown from a truly eclectic group of local stores, both chain and independently owned, to something more commercial, like its charm has been recognized and exploited. The rapidly-expanding city and those who live in it have embraced the idea of being “weird” for the sake of “keeping Portland weird,” rather than the interest that comes with unique perspectives. It reminds me almost of a middle school phase, begging for attention and acceptance through the subversion of a perceived norm–a frantic rejection of what used to be effortless. Portland is trying to simultaneously hold onto a forged identity and hide its darker notes: the lack of diversity in the population, the rising homeless camps, and the ever-growing wealth gap.

How do you cope with no longer being able to recognize what used to be your home? 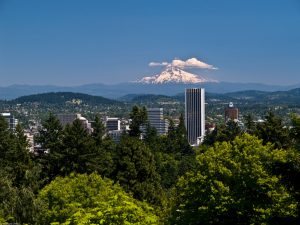 There’s probably not a perfect answer. Some days still get messy. Trying to integrate the concepts I had created, both during my time around the city and in my undergraduate years, has proved to be a little more than difficult. It’s important to recognize beauty in the little things, from the way that the pavement looks slicked with rain to the bright blue on green of the St. John’s Bridge on a sunny day, but these memories are just worthless nostalgia without coming to terms with change.

Growing apart from Portland has been one of the hardest things I’ve ever had to do. It’s a struggle that I see in my friends as well, no matter how close to home they are. Undergraduate experiences are brought to life by learning and growing, and learning that home is not a place but a set of situations and interactions is the harsh conceptual backbone of it all.

Portland, in its green and gray glory, might not be “my city” anymore. That doesn’t mean that it never could be again. However, I have grown to appreciate Columbus in the spring, where wildflowers stretch to break through the layers of decomposing leaves, leaving dots of color on the horizon.

Both Columbus and Portland have unique perspectives, both have inherent beauty and both have room for growth. You just have to be willing to look for it.