Due to necessary server maintenance beginning at 8 am on March 12th, CONSORT (Books & Media) will be unavailable for use. During this time, you can search the collection through the OhioLINK catalog by limiting the Location to “CONSORT Colleges”. However, you will not be able to request items from other CONSORT or OhioLINK schools during this time.

Additionally, access to research databases from off-campus will be unavailable during this time. We apologize for any inconvenience. We anticipate the interruption to last about 4 hours. Please plan accordingly.

Special Collections will be closed for the entire day on Thursday, March 10th. It will reopen on Friday, March 11th with regular hours. Please plan accordingly. We apologize for any inconvenience.

Fair Use Week, an annual celebration of the doctrine of fair use, kicks off on Monday February 22!

An important limitation to the exclusive rights of copyright holders, fair use and its four factors can help you determine if your proposed use of copyrighted material favors fair use or if you need to secure permission from rights holders. For general information about fair use and links to resources written for students and faculty, check out the OWU Libraries Copyright and Fair Use LibGuide. 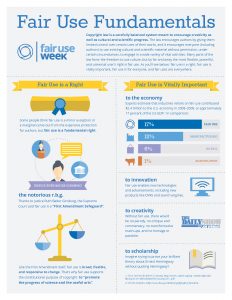 Brush up on your “Fair Use Fundamentals”

Visit the Fair Use Week Resources page to view fair use-themed videos, podcasts, articles, and more. To keep up with the latest news and events, follow @fairuseweek on Twitter.

As part of the celebration, MIT and Harvard will be co-hosting (and live-streaming) a panel discussion on fair use in scholarly journal and book publishing on Tuesday, February 23 from 12:00 to 1:00. Don’t miss it! 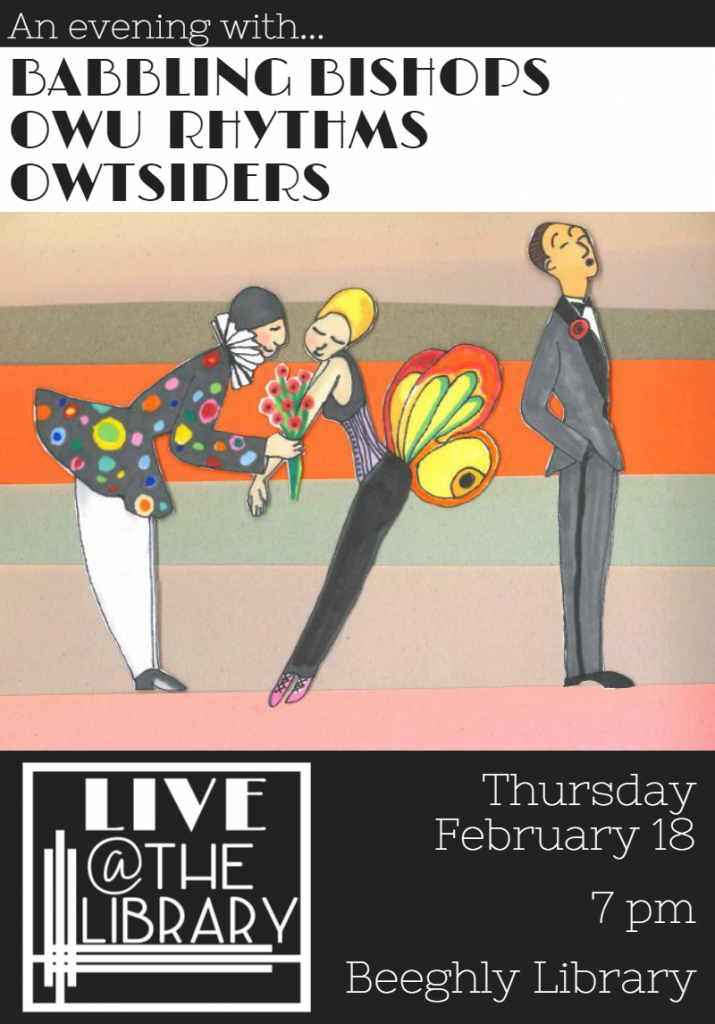 For the second year in a row, OWU Libraries presents an evening of live performances, mocktails, and food. Please join us on Thursday, February 18 at 7 pm and enjoy dancing by OWU Rhythms, a cappella singing from the OWTsiders, and hilarious improv from the Babbling Bishops. We hope to see you at this FREE event!

For more information and to RSVP, please see our Facebook event page.

Between Alexandria and Babel: Building and Exploring Digital Libraries
A Lecture by Paul Dilley, Ph.D.
Thursday, 2/25, at 4:00 pm in the Bayley Room, Beeghly Library

The past decade has seen unprecedented growth in the scanning of manuscripts and books, and the general proliferation of digital texts.  The development of “million-book” online libraries will have revolutionary consequences for how we access, explore, read, and interpret literature.  Digital Humanities plays a key role in the production and analysis of these extraordinary archives. Dr. Dilley will highlight two complementary strategies for unlocking their potential: rich annotation and distant reading.

Dr. Dilley conducts research in the religions of the Mediterranean world and Iran, from the Hellenistic period to early Islam. He is especially interested in the development of Judaism and Christianity within the various cultures of the Graeco-Roman world, including Egypt and Syria; and the classical tradition in these diverse environments.  His book manuscript, “Care of the Other in Ancient Monasticism: A Cultural History of Ascetic Guidance,” traces the emergence of new techniques of psychagogy, or “care for souls,” and corresponding notions of the self and society, in the Christian ascetic movements of Late Antiquity.  A second book project, “Don’t Laugh at Another’s Fall: Towards a Corpus and Theory of Ascetic Poetics,” examines early Christian stories about transvestite saints in the context of Graeco-Roman theater.

Dr. Dilley joined the University of Iowa in 2011. He has a joint appointment in Religious Studies and Classics and is a member of the Public Humanities in a Digital World initiative.

The lecture is made possible through Dr. David Eastman’s project Mapping the Martyrs, which is funded by Digital Collections: from Projects to Pedagogy and Scholarship, a grant from the Andrew W. Mellon Foundation to the Five Colleges of Ohio. More information about the Ohio Five Libraries’ Mellon grant can be found on the project site: Digital Scholarship: Projects & Pedagogy.