Summon, the library’s academic search engine, will be getting an upgrade over the summer, and we’d like to invite you to take a peek at the new look.

You can preview the new version of Summon at: http://owu.preview.summon.serialssolutions.com

The new look offers a more streamlined, modern interface that works on your desktop, laptop, tablet, or phone. For a quick overview of the new site, check out this short video we’ve put together:

Summon is an interdisciplinary academic search engine that complements subject-specific research databases by allowing all OWU students, faculty, and staff to discover books, journal articles, videos, music, conference proceedings, images, and many other types of materials available from the library’s collections from one place.

Hours for the OWU Libraries for the end of the semester can be viewed at http://library.owu.edu/hours/spring-endhours-2014.pdf. Please note that the Internet Café/Bashford Lounge will be open to students during the hours Beeghly Library is officially closed but will have no after-hours access the week between graduation and the start of summer session.

Faculty members recognized for their scholarship during the 2014 Celebration of Scholarship.
Photo credit: John Holliger

The OWU Libraries recognized over forty faculty members for their scholarly contributions during last week’s 2014 Celebration of Scholarship. Publications from a broad range of disciplines were on display during the event. The official bibliography is available online in OWU’s Digital Collections.

Director of Libraries Catherine Cardwell also recognized each of the 18 students who submitted papers for the 2014 research award.

For the second year in a row, the Libraries recognized a runner-up. Matthew Jamison’s paper “‘There’s No Business Like Show Business’: Male Sex Workers Performing Power and Control” was awarded second place. The judges were equally impressed with his writing and felt Jamison’s research demonstrated significant promise. 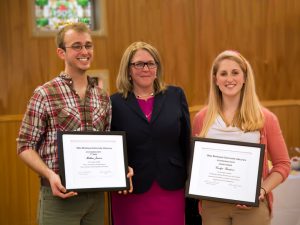 You may have already seen our scrolling image or received our flyer during Countdown to Commencement, but with graduation fast approaching, please remember the senior due date for most library items is coming up on May 12. Additionally, you may not know that failure to return library items or pay library fines will unfortunately result in the withholding of your transcript so please keep that date in mind to avoid any issues.  If you have questions or concerns about this date or your account we will be happy to speak with you. Please contact Beeghly Circulation at 740-368-3225 or beeghlycirc@owu.edu.

Each year, the Libraries honor OWU faculty, staff, and student scholarship at the Celebration of Scholarship. Join us on Friday, April 18, from noon-1pm in the Bayley Room as we recognize all faculty and staff who have published a book or article, created a music score or sound recording, exhibited artwork, or produced significant scholarship or creative work with an imprint date from the previous year. Also at the Celebration, the Libraries announce the winner of the $500 Libraries Student Research Award.

200 years after its original publication, the complete text and full illustrations of the nine volumes of Alexander Wilson’s pioneering work American Ornithology, published in Philadelphia from 1808 to 1814, have been digitized and added to the OWU Digital Collections. It was published a generation before J. J. Audubon’s The Birds of America. (1827–1839). 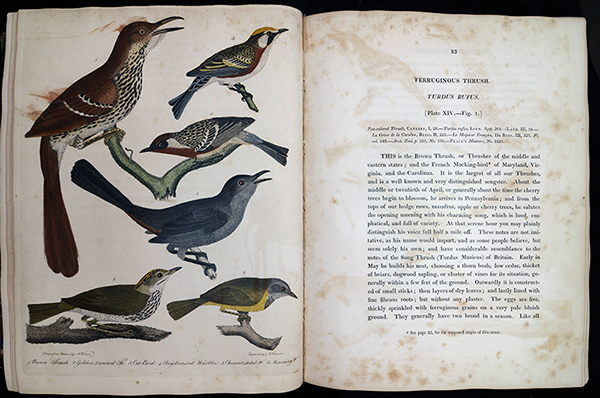 Wilson (1766-1813), a not-so-successful poet from Scotland, and a teacher, who, under the guidance of William Bartram, became a self-taught artist and naturalist, and after dedicating himself to the study and description of birds and to the dream of making “a collection of all of our finest birds”, earned himself posthumously, through this publication, the title “Father of American Ornithology.”

He described his work for the drawings in a letter to Thomas Jefferson (6 Feb. 1806), perhaps hoping to join an expedition to explore the Ohio and Mississippi rivers planned by the President:

“Having been engaged, these several years, in collecting material, and furnishing drawings from nature […], I have traversed the greater part of our northern and eastern districts and have collected many birds undescribed by […] naturalists. Upwards of one hundred drawings are completed….” (Burtt 2013, 41)

His study of the birds was to record more than their physical appearance. He speaks as a true naturalist in his introduction to Volume 1, writing:

“It is also my design to enter more largely than usual into the manners and disposition of each respective species; to become, as it were, their faithful biographer, and to delineate their various peculiarities, in character, song, building, economy, &c. as far as my own observations have extended […] noting their particular haunts, modes of constructing their nests, manner of flight, seasons of migration, favourite food, and numberless other minutiae, which can only be obtained by frequent excursions in the woods and fields, along lakes, shores, and rivers, and requires a degree of patience and perseverance, which nothing but an enthusiastic fondness for the pursuit can inspire.” (Wilson 1808, 2)

Wilson, Alexander. American Ornithology; Or, the Natural History of the Birds of the United States, Vol 1. Philadelphia: Bradford and Inskeep, 1808-14.